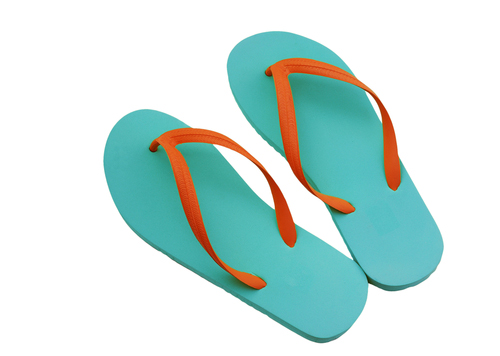 It's a sure sign of summer that there is a holiday celebrating the completely open footwear, something that barely qualifies as a shoe, but we here at Vocabulary.com think that this is a perfect time to commemorate the other meaning of flip-flop — a verb which means to change opinions to the other side of an issue. Often associated with politics, flip-flopping on an important point in a campaign can doom a candidate, because it is often viewed as not sticking to one's principles. Flip-flopping is not just changing your mind — it implies a reversal of a stance because opinion polls were not going in your favor.  Here are some vocabulary words related to going back on your word, defecting to the other camp, turning against your former allies, flip-flopping.

Fors more, check out this list: Change Your Mind

renege
Renege means to go back on a promise or obligation.  When used in this context, it fits well into the concept of "your word is your bond" — saying something, even without an explicit promise, compels you to act in ways that fit with how you said you would behave. Renege has a long history, first being attested in the mid-16th century, when it simply meant "to refuse." It was not until the late 18th century that the modern shade of meaning involving changing one's mind is attested. Etymologically, renege is related to the word renegade, a word for an "outlaw" or "a turncoat." It was also a the title of a syndicated TV series in the 1990s starring Lorenzo Lamas, which the less said about that the better.

abrogate
More official than some of the other words discussed here, to abrogate something it is not enough to just speak out against it or separate yourself from it in a public manner. In order to abrogate one must formally revoke a previously filed document or opinion. A more common synonym for abrogate is "repeal", as when a new administration seeks to repeal, or cancel, measures taken by the previous administration. In all of these cases, real action must be taken — rhetoric is not sufficient. The word comes from Latin abrogatus, from ab- "off, away from" and rogare "to propose a law, ask, request," so the official sense of cancelling a law is there even in the etymology.

repudiate
From the Latin meaning "to cast off by divorce," repudiate is a clear example of a word that is used when you have really changed your mind and seek to separate yourself from your previously held beliefs. Repudiate focuses on the demonization of where you were and not the positive aspects of where you are now. The word implies a certain level of anger and disgust at one's former positions, and at times if the repudiation gets too intense it can be difficult to believe or trust the same person who once espoused opinions they now hold in such low regard. Because it can be used in such extreme situations, repudiate — both the word itself and acts of repudiation — are often reserved for very sensitive social issues where the repudiator can claim that they have done a complete reversal of their opinion.

disavow
Like renege above, to disavow is to break a promise or belief. In this case, disavowal also includes refusing to stand behind something previously supported by you or your organization. Often in times of crisis or scandal, people who have up until now been boosters for the accused will disavow them when the evidence against their former friend becomes too great or the scandal simply reaches epic proportions. A vow, even metaphorically speaking, is held by many to be a solemn promise, so to break a vow, to disavow, the same thing one once held dear, is a serious decision. You can disavow a classmate who was your friend if they do something really terrible to you or someone else, but not if they merely lent you the pen that later exploded all over your jeans.

abjure
Abjure is a word that takes leaving a former belief behind one step further — it means to swear an oath that you reject the previously held position. Historically, abjure contains the same Latin prefix that we saw in abrogate, ab- "off, away from" and the verb iurare, which means "to swear." Abjure seeks to stop flip-flopping right after the person has flipped to the "right" position. The extra pressure, or guilt, of an oath will perhaps prevent going back to your past position and make you indebted to your new-found outlook.

renounce
This word is another one about changing your mind that deals in high stakes decisions. It is inappropriate to say that you've renounced your formerly favorite breakfast cereal because they removed your most-loved marshmallow shape, unless you are the celebrity spokesperson for said cereal — then it is a big deal. Renounce is a word that not only entails switching your viewpoint, but also explicitly rejecting a formerly held opinion. Abraham Lincoln has some interesting thoughts on the subject of renunciation:

...it is better to be only sometimes right , than at all times wrong, so soon as I discover my opinions to be erroneous I shall be ready to renounce them.

Here we see that Lincoln is unconcerned with how changing his mind might look to other people, he simply wants to be on the side of issues that his conscience and reason tell him is right, and if that means changing his mind, then so be it.  Renounce comes from a Latin root that means both "proclaim" and "protest against" and is a word with loud, public connotations.

Our opinions help make us who are as people, and they are often the result of reflection and deep thought. It can be a big deal, then, when we decide to change them. Perhaps this is one reason that the vocabulary of "flip-flopping" is littered with high stakes words of great import and consequence. While many people would like to live by Walt Whitman's famous words:

This edict is difficult to maintain in practice when you have other people in your life who call you on your hypocrisies and who might be in a position to penalize you for them. Whitman's dictum is also a terrible campaign slogan for any modern political candidate. Still, Whitman reminds us that carefully considering both sides is no crime, and that in itself is a valuable lesson for all of us, including those prone to yell "flip-flopper" at any change of heart.