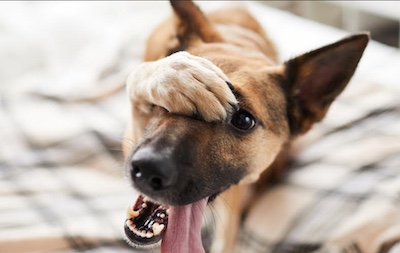 They say the only things certain in life are death and taxes. But a third might be awkward moments.

Even the suavest of the suave tend to misspeak, while many of us stumble and bumble through life, creating cringes in others — and especially ourselves. Awkwardness is as common as oxygen.

Maybe this is why the language of awkwardness is so deep. There are many words related to the goofs and gaffes that plague us all. So stop watching reruns of The Office for a minute and celebrate National Awkward Moments Day on March 18 with the lexicon of awkwardness. Because having a strong vocabulary should never be embarrassing.

Learn the following words and more on this vocabulary list: Awkward Moments

gaffe
This borrowing from French has been found in English since at least 1909, the date of this example from the Pall Mall Gazette: "These two gentlemen, whose weather predictions are still listened to with some deference, have made a bad 'gaffe', to use a popular slang expression." Based on that evidence, the term may be quite a bit older, since it always takes some time for spoken terms to make it into writing. Another early use, from Blackwood's Magazine in 1920, defines the term: "I had obviously said the wrong thing, committed a gaffe." We're deep into debate season, so you'll probably see this word every time a candidate makes a whoopsie.

blunder
A blunder is a mistake, which can create an awkward moment. Tripping over your feet or swearing during a job interview are two obvious blunders. This can be a noun or verb: you can make or commit a blunder, and you can blunder your way through life — though that is not recommended by nine out of 10 guidance counselors.

flub
A flub is another word for a blunder or gaffe. Like blunder, flub is also a verb: you could flub a marriage proposal by forgetting the other person's name, and a baseball player could flub a fly ball by dropping it. The origin of this word is uncertain, but it is an American term. One of the earliest recorded uses is by author P.G. Wodehouse in 1926 and involves a tough day on the golf course: "The spectacle of a flubber flubbing ahead of us on the fairway inclines to make us flub as well."

botch
The first meaning of botch wasn't as bungling as the current meaning. As the Oxford English Dictionary (OED) defines it, botching in the 1300s meant: "To repair (a worn or damaged item, etc.); to mend; spec. to make clumsy, imperfect, or temporary repairs to; to patch up." By the 1500s, the meaning has broadened to mean, "to carry out a task badly or incompetently." Today, the patchy meaning is mostly forgotten, and this is a synonym for a goof or faux paus.

gawky
This word shares three letters with awkward as well as plenty of meaning: a gawky person is clumsy and usually overgrown. The word most often paired with gawky is probably teenager. Since teens are growing rapidly and going through puberty, they tend to be gawky: they're just not used to their bodies. Similarly, a gawky, big-pawed puppy tends to stumble all over the place. Once the puppy grows into its skin, it'll be a lot more coordinated.

klutz
This is one of the gentler insults in English. The OED definition shows how the word has shifted in meaning since it first popped up in English about 100 years ago: "Originally: an awkward, socially inept person; a fool. Now more usually: a clumsy person." If you know someone who often drops things, trips over their own feet, and bumps into walls, you know a klutz. To be a klutz, you have to be awkward frequently, not just once in a while. The adjective form is klutzy. This is one of many colorful borrowings from Yiddish, such as schmuck, schlemiel, schmo, shlimazel, and yutz.

incompetent
This word is a little more serious than the rest of these mostly lighthearted words for ungraceful words and actions. An incompetent doctor could misdiagnose a patient. An incompetent driver could cause a wreck. An incompetent astronaut could violate our treaties with the lizard people. (Note to self: Check on current status of space treaties and existence of lizard people). This word is a pretty strong insult: I hope you're never described this way. It's much better to be competent, meaning you know what you're doing and do it well. Incompetent is a stronger version of inept.

bumble
Bumble rhymes with stumble and has a related meaning: to bumble is to stumble around clumsily. A common word pairing, at least in the days of yore, was bumbling fool. We often say someone is bumbling around, bumbling about, or bumbling along. Klutzes are experts in bumbling.

A strong vocabulary won't vaccinate you against awkwardness. But it will help you describe them in your tweets and memoirs.