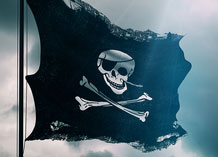 It is true that pirates are legendary for being murderous, carousing outlaws who pillaged and plundered at will. The names Black Beard, Captain Kidd and Calico Jack send a shiver down the spine of anyone familiar with pirate lore.

But does that mean we can't have a little fun exaggerating our "arrgh" sounds and threatening to make people walk the plank once a year? We think not, so on September 19th we're observing Talk Like A Pirate Day, the international "holiday" conceived by two guys during a racquetball game in 1995. Twenty-two years later, thanks in large part to the power of social media to fuel enthusiasm for such occasions, TLAPD is going strong.

This year, we've decided to dig a little deeper in the lexical treasure chest of pirate lingo than "avast me hearties" and words with the /arg/ sound (although those are important too, and we've got 'em right here!). We figure if you really want to talk like a pirate, you'll also need to know the words that describe a sailor's life on the high seas, diseases and all.

For more pirate parlance, check out our lengthier list: Words Every Pirate Should Know.

buccaneer
Buccaneer is a word that is synonymous with pirate. Originally specific to pirates on the Spanish coast, it has expanded to encompass the whole gang. The image of buccaneer in our collective minds may have something to do with the NFL's Tampa Bay Buccaneers, who go so far as to have a pirate ship in their stadium and to shoot off fake cannons every time the team scores a touchdown. Until a few years ago, their logo even included an image of a pirate with a blade in his teeth. Buccaneer has an interesting etymology. English took it from the French boucanier, which means "user of the boucan" which was a grill for roasting meats. This in turn is from mukem, from the Tupi group of languages spoken in Brazil (b and m are interchangeable in Tupi when they are the first sounds in a word). The Tupi people were indigenous to Brazil and were the first users of the grill. So in a sense, since the word derives from a kind of grill, the fans tailgaiting with their barbecues at Tampa Bay Buccaneers games are genuine, historical, buccaneers.

bilge
Used to describe foulness and garbage, the bilge is technically "the lowest internal part of a ship." The sense of the word has been extended, however, to all the gross stuff that collects there from water from small leaks to dead animals and the like. The word is historically a variant of bulge, which comes from old French boulge "leather sack."

careen
This verb originally applied to ships, and is from a French word which literally translates as "to expose a ship's keel," which means that the ship was turned on its side, a very dangerous situation for those aboard.

fathom
Fathom can be both a verb and a noun. The verb is more common in everyday usage and means "to understand", to get one's head around. The noun is the pirate definition though, and it is a measurement of depth, roughly equivalent to 6 feet. The connection between the two definitions is that if something is a fathom in depth it is "able to be measured", the way something that is fathomable is "able to be understood." Fathom is from an Old English word that means "length of the outstretched arm" and "embrace," and it is appropriate to think of all these sea-faring pirates embracing the seas as they measure the water's depth. Fathom has another connection to the land-based world of words. When depth was being measured and two fathoms was reached, the measurer would yell "mark twain (mark two)." This is most likely where Samuel Clemens, the author of The Adventures of Tom Sawyer and The Adventures of Huckleberry Finn, and a former river pilot, got his pen name, Mark Twain.

keel
The keel is the lowest plank of wood on a boat. It is the foundational piece, and the ship depends on it for strength and stability. The phrase "keep an even keel" comes from maintaining a level, horizontal position on a ship, and has been metaphorically extended to mean keeping a calm demeanor and not going from one extreme emotion to another.

pirate
Where does the word pirate itself come from? Latin pirata comes from Greek peirates. The Greek is literally "one who attacks," from peiran "to attack, make a hostile attempt on."

scurvy
This is a disease many pirates contracted because there was a lack of fresh fruit or other sources of Vitamin C on long voyages at sea. Scurvy involves swollen and bleeding gums and general weakness. It derives from the French scorbut. There are two competing etymologies for scorbut. One proposes that it is from Old Norse skyrbjugr or "a swelling (bjugr) from drinking sour milk (skyr) on long sea voyages." The alternative proposal says that the French scorbut is from Middle Dutch or Middle Low German elements schoren "to lacerate" and buik "belly" or, to put it all together, "a disease that lacerates the belly."

Now that you've downed these words like a swashbuckler guzzles rum, you're prepared to pepper your pirate-speak with sea-worthy terms that lend authenticity to your pirate-ese. Of you'll want to add a little color with the occasional "avast, me hearties" and "shiver me timbers." Anchors aweigh!