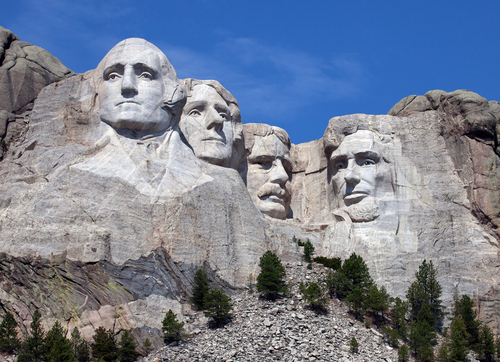 Presidents help to define and shape the times they live in. Dramatic events and crises like wars and financial uncertainty will always be associated with those who led the country through perilous times.

Beyond this, however, each administration seems to take on a life of its own, even in times of peace and prosperity, that characterizes what the country is concerned with at that moment in history. Throughout this history, presidents haven't just made policy, they've also been continually credited with introducing or popularizing words and phrases in America that help solidify the impression that a President "defines his times." Sometimes these words fit very well into our preconceived notions of who these men were, and other times, the words these presidents made famous seem strangely out of character for them.

sugarcoat
For example, President Abraham Lincoln, at 6 foot 4 inches tall, was an imposing, intelligent figure who is thought of as telling it like it was. This giant of a man is credited with popularizing quite the sweet, cuddly, evasive word — sugarcoat.  In an 1861 message to congress, Lincoln accused the southern army of the Civil War of sugarcoating their rebellion by claiming it was constitutional. At this time no one had heard the term sugarcoat before. The term was even objected to by the official government printer who was in charge of making a transcript of the speech. Over these objections, Lincoln predicted that "The time will never come in this country when the people won't know exactly what 'sugarcoated' means." Although it is hard to associate the cliched brooding visage of Lincoln with this word, he was right that sugarcoat has become a popular term for when you want to soften the blow of bad news or pretend a lie isn't quite a lie. In what follows I will be examining more words made famous by Presidents.

belittle
With his startling intellect, facility with the written word and exposure to other cultures through his world travels, the king of presidential linguistic innovation is without a doubt Thomas Jefferson. The Oxford English Dictionary credits him with introducing 110 separate words into English, including the decidedly French-sounding (Jefferson lived in Paris for five years) pedicure. One instance where Jefferson appears to have entirely created a word that has become standard modern English is the word belittle. Prior to 1781, when Jefferson first came up with this word, there had been a verbal use of little meaning "to lessen" or "to decrease." What Jefferson did is take that verb and put the "be-" from words like befoul and besmirch in front of it to introduce belittle, meaning "to make small," and figuratively, to "scorn as worthless." The verb form of little has been lost, but Jefferson's belittle lives on.

mammoth
The popularization of the word mammoth also involves Jefferson. The incident involves Jefferson and an immense block of cheese, a gift to Jefferson which was so huge that reporters had to find a word to to describe its sheer bulk. Mammoth comes from Russian mammot, an animal who rooted in the earth. The idea here is that this cheese (more than 4 feet in diameter) displaced hefty portions of earth just like a rooting animal. It was, in a word, gigantic, or mammoth.

founding father
Everyone has their ideas about Thomas Jefferson; he's famous for many things and it comes as no surprise to most that he would be credited with all these contributions to our language.  Another president who is swimming in a sea of linguistic innovation is one who many people have no impression of one way or another — Warren G. Harding. Although the exact facts are unclear, Harding is credited with coining the phrase founding fathers which one hears frequently, whether it be during election season or on television about Presidents' Day sales.

normalcy
Harding is also responsible for introducing normalcy into popular use when he said it on the campaign trail, where normalcy is not the norm.

"America's present need is not heroics but healing; not nostrums [remedies] but normalcy; not revolution but restoration."

bloviate
Although that quote has a nice ring to it and is short and sweet, another word became associated with Harding that indicated that he was normally anything but pithy and direct. Harding was was apparently so well known for his mangled writing and inability to put a simple thought down on paper simply that the word bloviate became associated with his prose and has been used to describe political speech ever since. Some derogatory terms have a hidden upside, but bloviate is not one of them. It calls to mind politicians filled with hot air, who don't know what they are talking about, but keep talking about it, forever and ever. Bloviators don't seem to have a thought in their heads, and it's next to impossible to tell what their mission is.

quixotic
John Adams popularized a term, quixotic, that denotes a mission that is "naively idealistic," fanciful and "whimsical." The word is derived from Cervantes' hero Don Quixote de la Mancha who imagines himself a brave knight while tilting at windmills.

first lady
It may be an apocryphal story, but President Zachary Taylor is credited with coining the term first lady in his eulogy of Dolley Madison, wife of James Madison, America's fourth president.

mulligan
Although it was a long-standing rule of the game, President Dwight Eisenhower popularized the golf term mulligan as a synonym for "do-over." The term itself may originate with an actual golfer named Mulligan, who was so kind as to drive all his friends to the golf course, so the friends in turn let him take "do-overs."

Presidents' Day allows us to put politics aside for awhile and celebrate the personalities that held the highest office in the land. There is perhaps no greater reflection of those personalities that the words they are credited with introducing or making popular.

To learn these words and more, check out Vocabulary.com's latest Presidents' Day list: Words Coined or Popularized by Presidents.