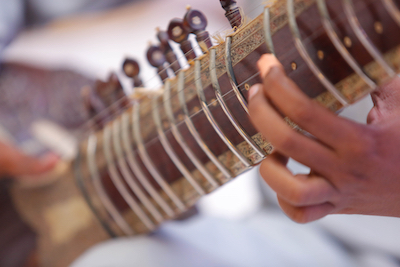 Some musical instruments are all over the place in popular music, such as the guitar, drum, and piano. Those instruments are so common that chances are you've at least picked one up at some point. Well, maybe not the piano, but you know what I mean.

Fortunately, the world of music is as vast as the actual world, and if you think guitars and drums and pianos are all there is, you're missing out on a wealth of incredible instruments, including the glockenspiel and theramin, which Hannibal Lecter played so seductively on the TV show Hannibal.

So please enjoy these memorable words for even more memorable instruments. If the words appeal to you at all, take a minute to YouTube any of the above for a listen to their unique sounds. Because besides learning new words, I don't know of anything in the multiverse better than listening to music.

To learn these words and more, check out this vocab list: Music to My Ears: Instrumental Vocab

lute
This is a stringed instrument similar to a guitar. Lutes are typically associated with Elizabethan music. In college, I went to a school best-known for music, so I was surrounded by musicians of the popular and classical type. I remember one friend playing me some lute music, which I thought was sensational. The pure tones of a lute made me feel all Shakespearean inside.

bagpipe
When I was a young lad watching sophisticated entertainment such as professional wrestling, one of my favorites was Rowdy Roddy Piper. A vicious brawler with a sharp wit, Piper had a few other unique elements to his act: he came to the ring in a kilt and played the bagpipes. But the bagpipe is much older than the 1980s, as the Oxford English Dictionary (OED) elaborates, describing the unique gizmo as: "A musical instrument of great antiquity and wide diffusion, consisting of an airtight wind-bag and one or more reed-pipes into which the air is pressed by the performer." I believe "great antiquity and wide diffusion" is a fancy way of saying: "This is super old and mega popular."

xylophone
This percussion instrument's name sounds like it comes from an alien planet in a distant galaxy of an alternative universe, but there's nothing super fancy about the xylophone: it's made of a series of wooden bars that you hit with a little hammer to produce musical notes. The sound of this word is a lot weirder than the sound of the actual instrument.

dulcimer
A dulcimer is a stringed instrument used mainly in American folk music. It has three strings, and a fretted fingerboard like a guitar. Like a guitar, the strings are strummed with one hand while the strings are held down with the other hand on a fretted fingerboard. The dulcimer has an elliptical shape that's very distinctive. There is also a type of dulcimer played by striking it with little hammers. Hammers, despite their association with carpentry and Thor, are often used to play musical instruments, including quite a few on this list. Dulcimer has been found in English since the late 1400s.

harp
Another stringed instrument, the harp is a massive instrument that the harpist sitting down, strumming the strings. Harps have a religious connotation for many people: the favorite instrument of angels is the harp, so it must be the most heavenly instrument. Like the lute, the harp has a bright, light sound. The word harp can also mean to talk constantly and dully about one topic: "The harpist did nothing but harp on about the bad weather."

lyre
If you don't want to harp on the word harp, here's a word for the same thing: lyre. In Greek mythology, the god Hermes created the first lyre from the entrails of Apollo's cows. Rather than being angry about the stolen cattle, when Apollo heard the lyre's music, he was enchanted. While musicians today play many versions of lyre-like instruments, the lyre itself is thought of as an antique, mostly of historical interest. While experts know that the root lyra is a Greek word, its origin is unknown. The word lyre also took on another meaning in the 1700s as a symbol of lyric poetry.

gong
An old TV show that may even predate Paleolithic Americans such as myself was The Gong Show. The idea was that terrible performers would get a chance to perform, but once a judge banged the gong, they were yanked offstage, which was generally a mercy to the audience. The gong, which is part of the percussion family, is a huge, metal, rounded disk. When you hit the disk with a mallet or drumstick, it makes a loud, deep, powerful tone. Why is a gong called a gong? Probably because the word gong sounds like gooooonnnnnngggggggggggg. This is an example of onomatopoeia, like buzz and moo.

bassoon
Baaaaaaasooooooooooooon. The name of this wind instrument offers a clue and a half to its sound: the bassoon makes a low sound, like all bass instruments. That's not quite onomatopoeia, but it's close. Many instruments are classified as bass by their low sound, from the tuba to the bass guitar.

fife
You're probably familiar with the small wind instrument called the flute. This is a similar instrument that's even smaller, with a unique sound: the fife. The fife has a particularly folkish flavor. When I think of the high-pitched sounds of the fife, I imagine elves dancing in the forest, while wood nymphs sing a happy tune and woodland critters frolic, but maybe I've had too much coffee. Anyway, the fife is similar to the piccolo.

sitar
The sitar is a stringed instrument that comes from India, and much like Indian food from curry to naan to chicken masala — it is awesome. Now I'm hungry. The sitar reached a larger audience in England and the United States thanks to George Harrison of the Beatles, but it has a long history in Indian music that is more than worth a listen. Sitars have long necks and as many as 21 strings. It's like a guitar, but in addition to the six or seven strings that a sitar player plucks, there are more that vibrate beneath the frets, called "sympathetic strings." Despite all these strings, the word sitar means "three-stringed" in Persian.