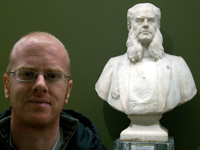 Reports of the demise of the crossword puzzle have been greatly exaggerated, says Visual Thesaurus puzzlemaster Brendan Emmett Quigley. Brendan — whose puzzles appear regularly in the New York Times, Paste, and The Onion, as well as on his own blog — responds to the latest doom and gloom about the future of crosswords with a note of optimism. Far from being a crossword-killer, Brendan argues, the Web is attracting bigger audiences to puzzle-solving than ever before.

Does anybody really think the crossword is going to disappear? Does anybody really think that with the folding of some venues that run puzzles (be it online or print or both) that crosswords are going to cease existing? If you read this article from the New York Times you'd probably think so. You'd think that as these markets are closing, the crossword would be doomed because they've "historically languished" on the Web.

While it is true that some puzzles are disappearing from newspapers, magazines and websites, are we really to believe that they cannot thrive on the Internet? I would argue that crosswords have gained popularity with the Internet — probably due, at least in part, to the fact that you can solve any major newspaper's crossword online, and in many cases for free. The New York Times has not only gained an even larger audience for their puzzles, they've also made good money with their online service.

The author of the Times article, Douglas Quenqua, argues that crosswords are unlikely to do well on the Web for two reasons: First, the average age for solvers is, supposedly, "well within the AARP membership requirements," (and presumably this age group does not use the Internet). Second, paper and pencil is part of the puzzle solving experience. Could he have used two more tired stereotypes of puzzle people?

According to Dean Olsher's latest book From Square One, an estimated 63 million do crosswords "at least occasionally." True, the 65-and-older population is one of the biggest demographics of crossworders. What Quenqua totally ignores and Olsher points out is that solvers in the 35-44 year range make up practically the same number of solvers as the 65+ group. The latest U.S. Census data shows that roughly 35 percent of the 65+ group are on the Internet, while 85 percent of 30-49 year-olds are on the Web. But even more telling from the Census figures is that all age groups show a massive increase in Internet usage over recent years, and it seems reasonable to predict that this trend will continue.

The argument that puzzles cannot be delivered through the Internet because people prefer to solve using pencil and paper just doesn't make sense. Just because you find a puzzle on the Internet doesn't mean that you can't print it out and solve it on paper. The monthly Visual Thesaurus crossword is printable, and the crosswords on my blog can be printed out too. My guess is that the people who originally got into crosswords with pencil and paper just cannot imagine any other way to solve it. It will be interesting to see how the growing numbers of iPhone/BlackBerry crossword app users feel once the new format for digital distibution of puzzles takes place.

The Times article is just a continuation of the same tired Luddite argument: that change is a bad thing. We've heard this from time immemorial. The phonograph was supposed to stop people from seeing live music. The radio was going to stop newspapers. Television was going to kill the radio. Cable was going to kill movie theaters. Now the Internet is supposedly going to kill all of media entirely. In every one of these instances, the new innovation didn't make everyone's lives worse, instead it enhanced them. It made it easier for people to enjoy the things they enjoyed in the first place. This is the way of the world: change is a good thing! This is all about making people's lives better. This is all about convenience, and convenience is going to trump everything else.

I know you're going to say: that's easy for you to say, Brendan. You already have online outlets for your puzzles. What about all the other puzzlemakers? Where are they going to post their wares?

To which my response is: it will be just a matter of time until the only way to get puzzles is digitally and all of us puzzlemakers are online exclusively. Probably, a goodly majority of the puzzles will be for free. I can see the puzzleholics out there cannot wait.