Not long ago, Cliff Mass, an atmospheric scientist in Seattle, blogged about a sandstorm that had occurred in Eastern Washington. Extreme weather is not unusual in that area, but the word he used for the storm was new to many of us: haboob. The novelty of the term, along with the spectacular photo on his blog of an oncoming haboob, had people talking about it for days. 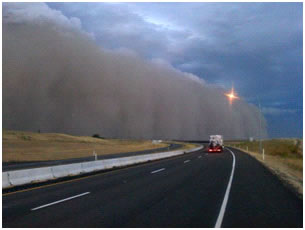 Given how much our day-to-day lives are influenced by weather — and especially by storms — perhaps it's not surprising that we have a rich vocabulary for these natural phenomena.

The biggest of all storms, of course, is a hurricane. This term came into English from Spanish, but originates in Taíno, a native language from the Caribbean. The regional origin of this name might explain why we use hurricane for storms in the Atlantic and in eastern Pacific, close to the Americas. For similar storms in the western Pacific and the Indian Ocean, we use the word typhoon, a term with a curious etymology: it appears to represent a convergence of a Greek word for a whirlwind and a Chinese word for "great wind." (Some speculate an Arabic origin also.) A general term for these types of large-scale storms — cyclone, from Greek for "rotate" or "wheel" — alludes to the fact that they revolve around a central point. 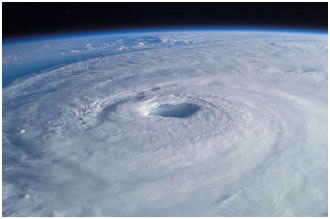 Aside from these well-known terms, there's a nor'easter for a large storm in the north Atlantic. This name follows the convention for naming winds, which identifies the direction from which they come; a nor'easter spins counterclockwise, hence brings winds from the northeast.

Inland, a derecho is a hurricane-scale storm that is primarily associated with the Midwestern areas of the U.S. and Canada. Derecho is the Spanish word for "straight ahead," and came into use to describe the storm's wind pattern, which meteorologists call "straight-line wind." The "straight" nature of a derecho was intended to contrast with the circular nature of a different storm: the tornado, which occurs frequently in the same geographic region. The name tornado is another Spanish term, which might either derive from a word for thunderstorm or from a word for "to turn." An informal term for a tornado is a twister, named for its characteristic motion. The word cyclone is also used informally for tornados, since they're another type of revolving storm, but not by professionals.

If you substitute snow for rain in one of these large-scale storms, you get a blizzard. While I'm sure that the Anglo-Saxons huddled in their longhouses against snowy blasts, they did not bequeath us this word; blizzard is both a surprisingly modern term (the first recorded cite is from 1859) and originally an American one.

Generically, any strong wind is a gale (possibly of Norse origin). For meteorologists, a gale has a more precise definition: it's a wind that's between 34 and 40 knots, as measured on the Beaufort Scale, which has similarly precise values for terms like strong breeze, high wind, violent storm, and hurricane force. Another generic term for a wind-bearing storm is tempest (from Latin via Old French), whose metaphoric sense of tumult goes back almost as far as its weather-related sense. I for one would love to hear a TV weatherperson bring the word tempest back into everyday use.

There are many regional terms for winds and windstorms that occur regularly. People near mountains often experience type of wind called a föhn (or foehn, pronounced fern), which occurs in the Alps. This is a wind that comes down off mountains (that is, the wind is katabatic) and is channeled via valleys or passes. In Southern California, a famous föhn-type wind is the Santa Ana wind that blows out of the high desert to the east and whose extreme dryness can contribute to wildfires. (Some say that the Santa Ana wind makes people in Los Angeles restless and violent.) I grew up along the Front Range in Colorado, and in the spring we often experienced the extremely strong Chinook wind, whose unseasonable warmth has given it the nickname "snow-eater."

Other regional winds are the Diablo wind in Northern California, the Knik and Taku winds in Alaska, and the Squamish in British Columbia, though not all of these are warm winds (quite the contrary). Further afield are winds such as those in the Mediterranean region including the Mistral and Levant in France, the Ostro in Italy, and the hot, dry Sirocco that comes off the Sahara.

The Sirocco brings us back to Arabic, which is where we also get the haboob that we started with. Look out your window, and if it's a blustery day, there's probably a term that precisely names the wind you're experiencing, whether that term comes to us from a Native American language, from Spanish, or from a language of the African deserts.

Mike Pope has been a technical writer and editor for nearly 30 years. He has worked at Microsoft and Amazon, and currently works at Tableau Software. You can read more at Mike's Web Log and Evolving English II.

Click here to read other articles by Mike Pope