As our culture becomes more homogenized, regional language distinctions fade away. But many are still out there, and they're still fun.

Case in point: Taylor Swift's video on New York City-specific vocab, made for NYCGO's "Welcome 2 New York" campaign. The video introduces terms like bodega, the non-Texas-style pronunciation of Houston Street ("How-ston"), Soho, Noho, and stoop, which Swift compares to what Southerners would call a porch.

Swift's video doesn't get into etymology, but if it did, she might have noted that stoop derives from a Dutch word. Its presence in a New Yorker's vocabulary is a legacy of the original Dutch occupation of Manhattan island, much in the way streams in the area are often referred to by the Dutch word kill, as in the Catskill State Park.

Of course, New Englanders would call that same stream a brook, just as Pittsburghers might call a shopping cart a buggy, Pacific Northwesterners might call something expensive spendy, and someone living in New Orleans might refer to a sidewalk as a banquette and a toilet as a commode. Regional peculiarities don't stop there. What do you say: Faucet or spigot? Jimmies or sprinkles? Hoagie, hero, grinder, or wedge? Tennis shoes or sneakers? Soda, pop, tonic, or soft drink? Chances are, your preference has to do with nothing but the ground you're standing on.

Perhaps Swift will continue this foray into dialectology, digging up and pontificating on regionalisms wherever she goes. We offer her this list of truly unusual examples of regional dialect we pulled from the Dictionary of American Regional English. Check out the list for yourself, and then, if you have a favorite regionalism you haven't seen here, let us know what it is by leaving a comment below! 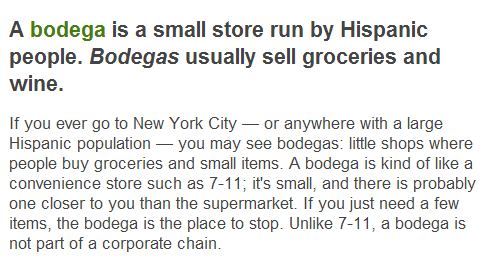