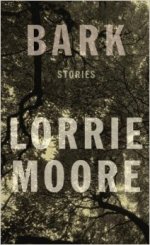 Let’s start with that title [Bark]. The three epigraphs (from the poets Louise Glück, Caroline Squire and Amy Gerstler) point toward both the canine and arboreal senses of the word — a monitory utterance, a protective shell — and those senses keep bobbing up from story to story.

Arboreal means "pertaining to trees." If you happen to remember that the April holiday Arbor Day is tree-related, this won't take you by surprise. You might also intuit from Gates's reference to "both the canine and arboreal senses of the word [bark]," that since canine means "pertaining to dogs," arboreal's definition will involve "pertaining to" as well.

But let's say you're not a fan of Arbor Day, a student of Latin, or even a person graced with an understanding of the word canine....No problem. Gates has conscientiously supplied further clues in his sentence which will make everything clear. Sort of.

It's always tricky when a word's context clues are as opaque to a reader as the word itself, and this is likely to be the case for many readers here. When Gates clarifies "canine and arboreal senses of" bark as "a monitory utterance, a protective shell," a reader might be more, rather than less, confused. Monitory, which means "serving to warn," as a dog's bark might do, is rarer than arboreal and makes canine look like the lexico-equivalent of house and car.

And yet, once you've got those three words under your belt, you're suddenly able to understand the richness of Gates's wit. To indulge in an exclamation point, which Gates calls "that cheap and skinny punctuational powerhouse" when crediting Moore as its "great deployer": Fun!