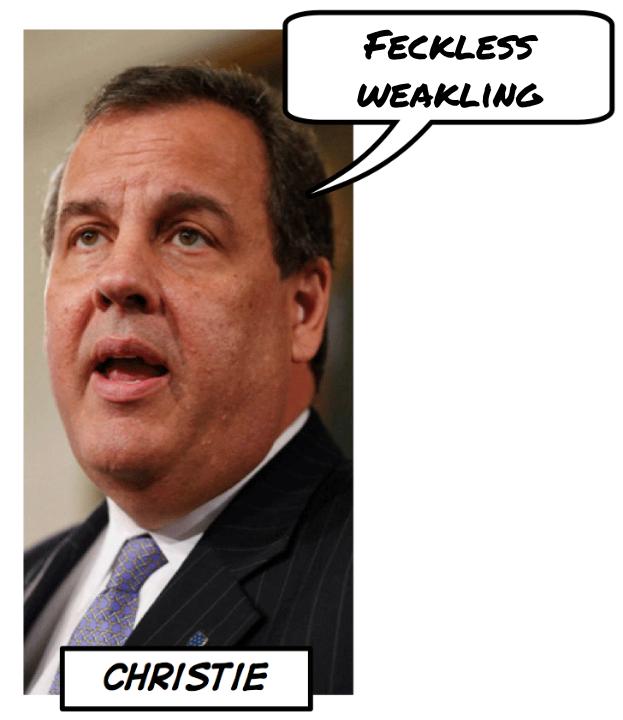 A Vocabulary.com user reported on a vocab-in-the-news moment today: He woke up to his clock-radio alarm in mid-Republican-presidential-debate recap, just in time to hear Governor Chris Christie calling President Barack Obama a "feckless weakling."

"Now that's some good vocabulary!" our user wrote in.

He is not wrong. Feckless is a wonderful piece of vocabulary. It means "generally incompetent" and "unfit." It's derived from feck, a Scottish shortened form of effect, so it literally means "effectless." Think of it as a word you might use to dismiss your good-for-nothing son-in-law.

Based on last night's spike in feckless look-ups reported by Merriam-Webster, we can infer that our user wasn't the only one struck by this word's dismissive, twist-the-knife quality. The word is in fact part of a mini-meme. (For other relevant vocabulary from last night's debate see our "Relevant Words from the Fifth Republican Presidential Debate" vocabulary list.)

Christie himself had used feckless in the undercard round of the last Republican debate, referring to "an absolutely weak and feckless foreign policy that was engineered by Hillary Clinton and Barack Obama." And back in 2012, following the storming of the U.S. embassy in Benghazi, Sen. John McCain suggested that "the feckless foreign policy as conducted by this president…is such that the president of the United Stated will not even set deadlines [with Iran]."

Earlier that year, when then presidential candidate Mitt Romney compared Obama's foreign policy to President Jimmy Carter's during the 1977 Iran hostage crisis in a Washington Post op-ed, he used feckless as well.

Beginning Nov. 4, 1979 , dozens of U.S. diplomats were held hostage by Iranian Islamic revolutionaries for 444 days while America’s feckless president, Jimmy Carter, fretted in the White House. …The same Islamic fanatics who took our diplomats hostage are racing to build a nuclear bomb. Barack Obama, America’s most feckless president since Carter, has declared such an outcome unacceptable, but his rhetoric has not been matched by an effective policy. While Obama frets in the White House, the Iranians are making rapid progress toward obtaining the most destructive weapons in the history of the world.

After Romney's op-ed appeared, Sen. John Kerry defended Obama on the Senate floor. Kerry urged his audience to not only recall the killing of Osama bin Laden as a foreign policy achievement demonstrating Obama's effectiveness, but to consult the feckless entry in their dictionaries.

"George W. Bush may have said 'wanted dead or alive' but it was President Obama who delivered it," Kerry said. "I don't know if Governor Romney has checked the definition of the word 'feckless' lately, but that raid ain't it."

Romney was hardly the first to call Obama feckless. In 2011, Jim Garrison used the word to describe Obama's domestic policy in a Huffington Post piece, "Obama the Feckless."

Obama will certainly go down as the first black American president, and this is how he will probably be remembered in the history books. But in terms of the actual significance of his leadership and what he substantively has done during his tenure, 'feckless' — which means "unable or unwilling to do anything," or "lacking the organization necessary to succeed" — is the only apt word.

Finally, there's this: According to Edward Klein's juicy Blood Feud, a tell-all chronicle of what Klein characterizes as a simmering feud between the Clintons and the Obamas, even Hillary Clinton has called the president "incompetent and feckless" in a "boozy" conversation with friends.

Whether President Obama is in fact feckless is something that only history will tell us, but the fact that it has become a mini-meme has at least allowed this highly specific vocabulary word to get some air.