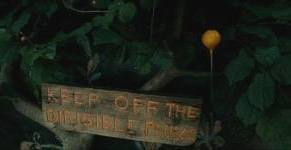 Much has been said about J.K. Rowling's ability to coin words.

Her concoctions are so intrinsic to the Harry Potter series' popularity, its U.S. publisher, Scholastic, features a Harry Potter glossary on its website, where you can learn that aconite is a "plant used in potions [and] also known as monkshood or wolfsbane," and a niffler is a "magical creature that can find buried treasure...[that is] black and fluffy with long snouts and spade-like feet." Writing about Rowling's inventive vocabulary on this blog (and in an interview and blog post for NPR's Morning Edition) Vocabulary.com lexicographer Ben Zimmer suggested that one legacy of the popularity of the series will be that "young readers who expanded their literacy with the Harry Potter books will carry with them a delight in linguistic play." A delightful idea.

But what of the words Rowling uses that aren't Rowling-made?

In spite of the fact that the Harry Potter series is often embarked on by children in the youngest elementary school grades, the series is a treasure trove of sophisticated, SAT-worthy vocabulary. Rowling is such a strong story teller, your average child reader of Harry Potter and the Sorcerer's Stone will plow past words like tawny, gaunt, sallow, infusion, keen, lurk, and askew, perhaps retaining some sense of their meaning and if not, laying the groundwork for future encounters with those words. 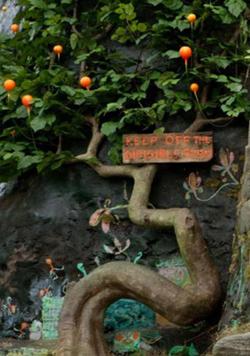 And sometimes, the story lingers long enough  that an unfamiliar word's meaning may forever lodge itself in a reader's mind. Take dirigible, as in dirigible plums, a favorite plant of Harry's fellow Hogwarts student Luna Lovegood. References to this floating fruit appear throughout the novels, and in the seventh movie the camera lingers on a handmade "Keep Off the Dirigible Plums" sign in the garden of Shell Cottage, Luna Lovegood's home.

As an adjective, dirigible means "capable of being steered," and a dirigible is a self-propelled floating ship. An image of dirigible plums that do float much like balloons tied to the branches of a dirigible plum tree is just the thing to keep dirigible itself tethered inside the brain, the memory of which Harry Potter readers can summon next time they're tasked with assigning a meaning to this word.