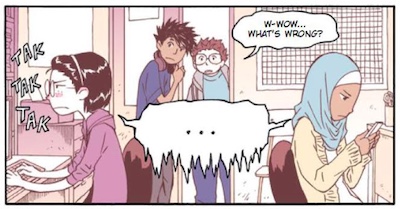 If you're looking for engaging texts that will appeal to readers at all levels, stock your classroom library with graphic novels. Then, support your students' reading with our ready-made vocabulary lists.

A Peek at the Creative Process

To give you a behind-the-scenes peek at the process of creating graphic novels, Vocabulary.com invited award-winning author Svetlana Chmakova to comment on four panels from her popular Berrybrook Middle School series, which includes Awkward, Brave, Crush, and the forthcoming Diary, available in bookstores on October 29, 2019.

"Jenny's character is one of earnest extremes, and I wanted to play with the visual comedy of trying to explain them to the viewer. I thought of adding an erupting volcano in the background of that last panel, for more epic drama, but then decided it would be overkill. To this day I wonder if I was wrong."

"The feeling of being ignored, left out, and forgotten is something I personally experienced a lot, and I know many readers have, too. I was really trying to convey that here with every visual trick I know — characters with their backs turned, color mood contrasts, the physical space between the character and where he wants to be, boxed in by the seemingly impassable mass of indifferent crowd."

"That last panel is an example of something that I could tell with one image so much better than I could with just text. The grim icy silence between the two characters, the cranky, resentful, stubborn air of business-as-usual of them both, with Felipe and Jensen literally stuck in the middle — the imagery delivers all this information with all-at-once impact."

"I like thinking up fun visual ways of showing character attitudes and behavior — in this case, of Olivia giving Garrett the cold shoulder. So I drew a giant cold ice boulder to convey the mood of their situation. Good luck getting through that chunk of icy attitude, Garrett."

More Insights from the Author

Chmakova also shared advice for budding graphic novelists and recommended more great graphic novels for middle and high school students. Here's what she shared with us:

Vocabulary.com: How do you view the interplay between words and visual images in graphic novels and comics, either in terms of your work as a creator or in terms of the reader's experience of the narrative?

Svetlana Chmakova: I see them as two different streams of information delivery that team up to tell the story in a more impactful way. There are things that are more effectively conveyed with visuals, which is why we take photographs and have art; and there are things that are best conveyed with words, which is why we have language. Combining the two creates a very powerful medium where you could deliver the equivalent of a paragraph's worth of background information in a single image.

V: Please tell us a little bit about your process when creating a new graphic novel/comic. How do you move from the initial idea to the finished work?

SC: Book beginnings are always messy for me — I'll have an idea of the story I want to do, the characters I want to drive it, and then I’ll just start sketching and scribbling notes about anything and everything that pops into my head related to that. Once I have a lot of notes like that, I will distill that mess into a 1-page book pitch, with character descriptions and a couple of paragraphs for the plot outline, to show my editor. We will discuss everything, and once we're on the same page about the story's direction, I will start scripting and storyboarding, which is a very important stage of the book development. I go through many, many, many redraws of my rough storyboards, to make sure that the story reads well and delivers what I want it to. After the storyboards are finished and approved by my editor, I begin production on the actual finished pages — pencils, inks, and colors. I used to do my own lettering but these days my publisher handles that. And at the end of all this work, there is a finished book!

V: Now for a question that was submitted to us by an actual middle schooler: What was your inspiration for the characters in the Berrybrook Middle School series? Are any of the characters or events based on your own experiences?

SC: None of the characters or events are ever based on reality — I keep my work entirely fictional. I do draw some inspiration for the situations that my characters might face from the common problems I remember encountering in middle school. Being bullied, getting a crush, worrying about how I am seen by my peers...I take those as core concepts and then build my stories and character interactions around those general ideas.

V: Do you have any advice for children and teens who are interested in creating their own comics/graphic novels?

SC: Start a webcomic! It's a great way to learn about what goes into creating a comics page on a regular schedule, to build your audience, and to figure out if this is something you actually want to do.

V: Besides your own, what graphic novels would you recommend to middle school and high school readers?

SC: There are so many amazing ones! I could go on and on, but here are some that I own and have been re-reading recently. For older middle school/high school, M.F.K. by Nilah Magruder is a stunningly beautiful and engrossing fantasy. El Deafo by Cece Bell, and Pashmina by Nidhi Chanani for middle grade — both are so, so good. NewsPrints and its follow-up, EndGames, by Ru Xu, have sweeping adventure, heartfelt characters, and a fascinating world. For more recommendations, everyone should ask your friendly neighborhood librarian! They will find you books to love that you didn't know existed.

To help your students get the most out of the Berrybrook Middle School series, assign activities for Vocabulary.com's curated vocabulary lists for Awkward, Brave, and Crush. Below, you'll also find links to our lists for a wide range of graphic novels and nonfiction. Be sure to bookmark our list page: every week, we add new vocabulary lists for the books that teachers want to teach and students want to read.

Be Prepared by Vera Brosgol

March: Book One by John Lewis and Andrew Aydin

Maus I: My Father Bleeds History by Art Spiegelman

Maus II: And Here My Troubles Began by Art Spiegelman

Measuring Up by Lily LaMotte and Ann Xu

The Cardboard Kingdom by Chad Sell

The Legend of Auntie Po by Shing Yin Khor

The Unwanted: Stories of the Syrian Refugees by Don Brown

They Called Us Enemy by George Takei