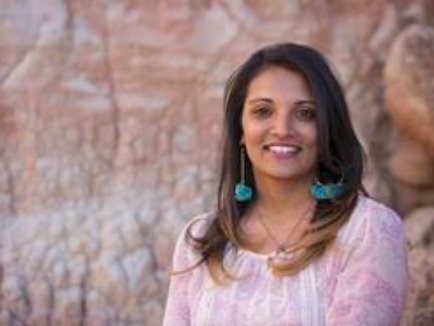 In our summer reading series, Vocabulary.com gets up close and personal with the authors of some of our favorite books about summer.

First up is bestselling author Sandhya Menon, whose young adult romantic comedies deserve a spot at the top of your students' summer reading list.

In Menon's first book, When Dimple Met Rishi, recent graduate Dimple Shah can't wait to spend the summer before college immersed in a program for aspiring app developers — but she never expects that one of her classmates will be the boy her traditional parents want her to marry. Menon's second novel, From Twinkle, with Love, focuses on an aspiring filmmaker who hopes to make her mark at her school's Midsummer Night celebration with a gender-swapped retelling of Dracula.

Our custom-made vocabulary lists for When Dimple Met Rishi, From Twinkle, with Love, and Menon's latest novel, There's Something About Sweetie, will help your students get the most out of these popular rom-coms.

In an interview with Amanda M. Leff, Vocabulary.com's Director of Curriculum Development, Sandhya Menon discussed her novels, recommended more great summer reads, and revealed a couple of her favorite words (they might surprise you!). She also talked about her latest book, There's Something About Sweetie, which came out on May 14th.

Amanda M. Leff: In When Dimple Met Rishi, your main characters grow and change significantly during their summer at InsomniaCon. Do you think summertime is a particularly apt backdrop for a coming-of-age story?

Sandhya Menon: I think so. In high school, there's such a remarkable change from one grade to the next. You're changing so much as a person — what you want is changing, and you're discovering new things about yourself. I think summertime is this time when kids don't have a ton of homework and they don't have external obligations hanging over them. They have more time to focus inwardly on what they want to do with the coming year and where they're going. In When Dimple Met Rishi, Dimple and Rishi are done with high school, and they're kind of figuring out who they want to be. I really love novels that take place in the summertime and that are geared towards teens, because I do think that summertime is just this time of change and innovation for them.

AML: As they're they're doing that work of figuring out who they are, Dimple and Rishi are both struggling to balance social, cultural, and familial expectations against their desires to follow their own passions. Did you face any similar difficulties when you were deciding to become a writer?

SM: Definitely. I pulled Rishi's big conflict between wanting to become a comic book artist and his parents wanting him to become an engineer directly from my life. I was definitely told, “You can be a doctor or an engineer.” I was always a very prolific writer. I used to fill up these notebooks, and so I remember my parents telling me, "When you're older and you're a doctor, you'll have lots of money, so you could take some time off and write on the weekends and at night. But for supporting yourself and your family, doctor is the way to go." For a long time I tried to fit that ideal, and I tried to be pre-med in college and all this stuff, and it just didn't feel right. It didn't feel like what I really wanted to be doing with my life. I think that for a lot of teens this is true, whether your parents are immigrants or not, or whatever culture you're from. There's this generational gap where parents tend to have one vision for their teens and the teens have a completely different vision for themselves.

AML: It was very interesting seeing how that played out in the book because Dimple frames herself as a rebel from the beginning, but with Rishi, it takes a lot more work for him to get to the point where he's ready to embrace what he really wants to do.

SM: Right. Exactly. There's a whole process of letting go, you know? You have to let go and realize it's okay to not follow your parents' instructions for your life.

AML: Relatedly, both When Dimple Met Rishi and From Twinkle with Love feature strong female protagonists: young women who are forthright about their feminism and their desire for success in traditionally male-dominated fields. What was your thought process in crafting those characters?

SM: In From Twinkle with Love, Twinkle is an aspiring filmmaker, but when she looks around, most of the films that hit the top 250 spots were made by rich white guys. And I took that directly from my life. When I was her age, in the 90s, I really wanted to be a published author, but it seemed that [every book] on the bestseller list had white American men on the cover, and I thought, "Well, does that mean that there's no place for me at the table? Nobody else like me is doing this. So is this just a pipe dream?" For Dimple, she definitely doesn't think it's a pipe dream; she's a lot more confident and she thinks, "Well, this is how I'm going to get a place at that table. I'm going to fight tooth and nail for it." There are both kinds of women trying to break into these male-dominated fields, and I wanted to represent both types because both are equally valid. It's okay to be fearful and to wonder, but it's also okay to be ambitious and unapologetic about it.

AML: Both When Dimple Met Rishi and From Twinkle with Love foreground class differences. Dimple and Twinkle both come from working class backgrounds, and they talk openly about struggling financially in ways that their love interests and many of their peers don't. So I was wondering if you could talk a bit about the importance of representing socioeconomic diversity in YA literature.

SM: I think that a lot of times the heroes and heroines of stories are very wealthy, very glamorous, because this is the kind of thing that people like to read about. When I moved to the U.S. at 15, I moved from a wealthy background in India, but when we moved here, my family had a lot of the loss of wealth that immigrant families typically suffer from. And so I felt really out of place within this special academic school for gifted children. It was a really small school, and a lot of my peers were children of lawyers and doctors who had been in the U.S. forever and were very wealthy. My dad was an engineer, but when we moved here, we lived in free housing. So I really wanted to show that even kids like that can get to be heroes — not in an "issue" book, but in a fun, happy book where they'd get their happily ever after.

AML: Your third novel, There's Something About Sweetie, was just released on May 14, 2019. Can you say a few words about that book so that readers know why they should run right out and add it to their summer reading lists?

SM: There's Something about Sweetie is the companion novel to When Dimple Met Rishi, and it follows Ashish, who is Rishi's younger brother. Ashish is this player/jock kind of dude, and he's completely lost his mojo. In a weak moment, he challenges his parents to set him up with someone who they think he would be good with — and really his motivation is to prove them wrong. They end up finding Sweetie, who is a self-proclaimed fat athlete, and she is unapologetic and very strong in her own way, but she's also completely different from anyone Ashish has ever dated. So they decide to go on four dates that Ashish's parents pick for them. In the beginning, they think, "This is never going to go anywhere; we're too different." But of course, over the course of the novel, they figure out that they might have more in common than they realized.

AML: What are some of your favorite or recommended summer reads?

SM: I am a huge Jenny Han fan, of course, and I recommend all of her books, [like To All the Boys I've Loved Before]. I've also a big Stephanie Perkins fan. I tend to read a lot of contemporary, but I loved The Belles by Dhonielle Clayton, and she has her sequel coming out soon, The Everlasting Roses. I can't wait to read that one. Something that's not young adult, but it's kind of crossover fiction that I've loved recently is Red, White & Royal Blue by Casey McQuiston.

AML: At Vocabulary.com, we love words, so we were curious what some of your favorite words are: words that are meaningful to you in some way, or words that you just happen to love because of the way they sound or what they mean.

SM: I love the word mindfulness, just because I am a therapist, a psychotherapist, as well, and so that's something that I find there's great power in, just the power of the present and staying in the current moment and enjoying every bit of what you can. The other one that I love that's kind of more esoteric, I guess — I hope I'm saying this right — is cacoethes. It's this rare mid-16th-century word, and it means the urge to do something inadvisable, which I think we can all relate to. I just love that word.

AML: Thank you so much for discussing your work with me!

In the next installment of Vocabulary.com's summer reading series, we discuss The Season of Styx Malone with award-winning author Kekla Magoon.

This interview has been edited for length and clarity.

Sandhya Menon is the New York Times bestselling author of When Dimple Met Rishi; From Twinkle, with Love; and There's Something About Sweetie. A full-time dog-servant and part-time writer, she makes her home in the foggy mountains of Colorado. Visit her online at SandhyaMenon.com.

Amanda M. Leff is the Director of Curriculum Development at Vocabulary.com and has been working in educational technology since 2013. She previously taught at Wellesley College and New York University. She has a PhD in medieval English literature and would be delighted to recite Chaucer from memory at your next dinner party. In her spare time, she reads books, reads about books, and devises increasingly Byzantine ways to organize her Goodreads shelves.

Click here to read other articles by Amanda M. Leff