When the middle schoolers at Enrico Fermi School for the Performing Arts in Yonkers, NY swept the Vocabulary.com school leaderboard in May, their entire community stood up and took notice. 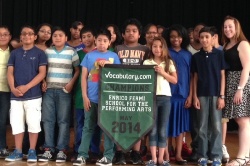 Not only were Fermi's principal and teachers on hand when students received the banner, local television and newspapers covered the event as well, and the Yonkers Public Schools created an inspiring video about the success Fermi is having with Vocabulary.com.

Why the strong show of support? Perhaps sixth grader Tawshiq Iqbal, who scored 2.5 million of the school's 37 million points, put it best when he explained to the Yonkers Daily Voice that vocabulary learning is key to any kind of academic success.

[It] helps him succeed at his standardized tests and academics, he said.  [And] "It really enriches your writing when you use good vocabulary…It gives it some pizzazz."

The Daily Voice quoted Fermi's principal, Miriam Digneo, echoing Tawshiq's analysis. She emphasized the importance of vocabulary learning for the Common Core, and put the school's David-and-Goliath victory in context.

[At Fermi, which] is primarily attended by children who come from a high poverty, low income community, motivation is not scarce.

"Our children are constantly striving to achieve," she said.

She added that many of the children had to put extra effort into participating in the program, because many of them do not have computers at home, and need to utilize public libraries to use the Internet.

Digneo said the achievement gives the children an extra incentive to believe success is reachable and doable.

As is often the case in schools where students are learning words at a remarkable rate, one teacher has taken a leadership role in introducing Vocabulary.com. At Fermi, that teacher is Stefanie Felidi, who was quoted as saying,

The most rewarding part of this experience was seeing how happy the kids were, seeing how they take pride in their school and their academics.

Watch the video made by the Yonkers Public Schools to hear Felidi and her students describe the impressive and rewarding work they've been doing on Vocabulary.com.