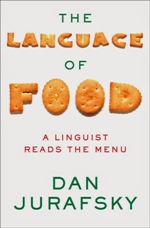 Although turkeys were domesticated by Native Americans, turkey itself is not a Native American word. In this excerpt from a new book The Language of Food: A Linguist Reads the Menu, Stanford University professor Dan Jurafsky charts the complicated path the word turkey followed into English, then chases it with a slice of etymological pecan pie.

Why does this bird always seem to be named after countries? Besides Turkey the list includes India, the source of the name in dozens of languages including French dinde, from a contraction of the original d’Inde, “of India,” Turkish hindi, and Polish indik. And there’s Peru (the source of the word peru in both Hindi and Portuguese) and even Ethiopia (in Levantine Arabic the turkey is dik habash, “Ethiopian bird”).

As we’ll see, the answer involves Aztec chefs, a confusion between two birds caused by Portuguese government secrecy and, indirectly, the origins of the modern stock exchange. And as with ketchup, it turns out that turkey and other favorite foods traveled around the world to get here, although in this case it’s a round-trip voyage that started with the Native Americans of this hemisphere.

The journey begins thousands of years ago in south-central Mex­ico. Many different species of wild turkeys still range from the eastern and southern United States down to Mexico, but our domestic turkey comes from only one of these, Meleagris gallopavo gallopavo, the species that Native Americans domesticated in Michoacán or Puebla sometime between 800 BCE and 100 CE.

We don’t know who the turkey domesticators were, but they passed the turkey on to the Aztecs when the Aztecs moved down into the Val­ley of Mexico from the north. The turkey became important enough to play a role in Aztec mythology, where the jeweled turkey is a manifes­tation of Tezcatlipoca, the trickster god.

By the fifteenth century, there were vast numbers of domestic tur­keys throughout the Aztec world. Cortés described the streets set aside for poultry markets in Tenochtitlán (Mexico City), and 8000 turkeys were sold every five days, all year round, in Tepeyac, just one of sev­eral suburban markets of the city.…

The turkey’s trip to Europe came very quickly after Columbus ate what were probably turkeys on the coast of Honduras in 1502. The Spanish explorers called them gallopavo (chicken-peacock), and sent them to Spain by 1512. The spread of turkeys through Europe was astonishingly rapid; by the mid-1500s turkeys were already in England, France, Germany, and Scandinavia.

The first few turkeys were brought over by the Spanish, but it was the Portuguese rather than the Spanish who did the most to introduce the turkey to Europe.…

In an attempt to break the Ottoman and Venetian monopolies on [the spice] trade, Portuguese mariners, starting with Vasco da Gama in 1497, sailed around Africa to reach Calicut [then the spice trading capital of India] directly by sea. On the way, they established colonies in the Cape Verde Islands and down the coast of West Africa, a region they called Guinea, slave-raiding and trading for ivory, gold, and local birds like the guinea fowl.…

Meanwhile, France and England had been importing a satiny black African bird that looked extraordinarily similar to a small female tur­key. Known today as a guinea fowl, the French and English first called this bird galine de Turquie (Turkish chicken) or Turkey cock, after the originally Turkish Mamluk sultans who first sold the bird to the Euro­peans in the 1400s. It was also called poule d’Inde (hen of India) because it was imported from Ethiopia (in the fifteenth century, “India” could mean Ethiopia as well as India).

By 1550 the Portuguese began to reimport this African “turkey cock” guinea fowl from West Africa (where there are long oral tra­ditions of breeding guinea fowl among the Mandinka and the Hausa) at the exact same time as they were shipping turkeys from the New World. Both quickly became sought-after commodities.

At the same time, the Portuguese government imposed strict secrecy on all of its maritime explorations, with the goal of protect­ing its advantage in international trade. Publication of its discoveries was forbidden and maps and charts were strictly censored. Portu­guese globes and nautical charts were not allowed to show the coast of West Africa, navigators were subject to an oath of silence, and the death penalty was prescribed for pilots who sold nautical charts to for­eigners. It was thus impossible to know that one bird came from the Americas and the other from Africa. Because Portuguese goods were routed through Lisbon to pay customs, the two birds may have arrived at Antwerp on the same Portuguese ships, and might even have been traded sight unseen to the English or Germans in the new bourse. The two similar-looking birds were frequently confused, in Antwerp and throughout Europe.

The result is that the English “turkey cock” or “cocks of Inde,” and the French “poules d’Inde” were used sometimes for turkeys, sometimes for guinea fowl, for the next hundred years. The two birds were confused in Dutch too, and even Shakespeare sometimes got it wrong, using “tur­key” in Henry IV, part I (act II, scene 1) when he meant guinea hen.

The English confusion between the two birds was only resolved when both were commercially farmed in England. In any case, our modern word arrived just in time for “turkey” to be actually eaten in the Renaissance, thus explaining the ubiquity of giant turkey legs in today’s “Renaissance Faires.”

Other languages were left with a similarly confused atlas of names; French dinde from “d’Inde,” Dutch kalkeon, many names (like Polish indik) dating from later reference to the Americas as the West Indies, and Levantine Arabic dik habash alone still pointing to Ethiopia, the source of the guinea fowl. German used to have a dozen names for tur­key (Truthahn, Puter, Indianisch, Janisch, Bubelhahn, Welscher Guli, etc.).….

Unlike most other Thanksgiving food names, the word pecan is Native American. English borrowed it from Illinois, a language of the Algonquin family. The original word was pakani, although we now pro­nounce our borrowing in many ways. My best friend from kindergarten, James, got married on a warm summer evening along the Brazos River of eastern Texas in what I was distinctly informed were “pickAHN” groves. But the word is PEE-can in New England and the Eastern Sea­board, pee-CAN in Wisconsin and Michigan, and something closer to peeKAHN in the west and many other parts of the country.

Why this difference? The region of the pronunciation pickAHN corresponds remarkably to the native range of the pecan tree. This is because the pickAHN pronunciation is closest to the original in the Illinois language (/paka:ni/). In other words, people in the area where the Illinois gave the word to English still use a traditional pronuncia­tion, while dialects farther away have a modified pronunciation influ­enced by the spelling.

From The Language of Food: A Linguist Reads the Menu by Dan Jurafsky. Published by W. W. Norton & Company © 2014. Reprinted by permission of the publisher.