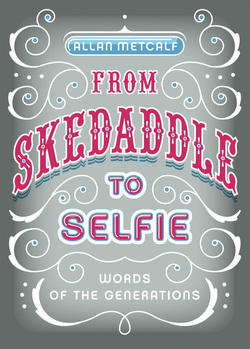 No matter what generation you were born in, your destiny is to hear incessant blather about generations, as journalists are obsessed by the topic, particularly when it comes to making the younger generation seem like unholy mutants born to usher in the end of days.

Allan Metcalf's new word book — From Skedaddle to Selfie: Words of the Generations — is a timely offering for era-obsessed readers with a taste for history and, of course, words. From the early days of America to the present day, Metcalf identifies the words that defined the various generations, providing plenty of word history and anecdotes along the way.

Metcalf uses Neil Howe and William Strauss' generational theory and terminology to ground this book. This creates a frame for the lexical explorations that are Metcalf's specialty, as he's demonstrated in Predicting New Words: The Secrets of Their Success, OK: The Improbable Story of America's Greatest Word, and Presidential Voices: Speaking Styles from George Washington to George W. Bush. Starting way back with the Republican Generation (born 1742-1766), Metcalf covers every American generation, including the Transcendental Generation (so-named for the likes of Emerson and Thoreau), the Lost Generation (World War I caused the losses), and the Silent Generation, an allegedly reticent bunch to which Metcalf belongs. Of course, there's plenty on the generations that are most likely to interest readers: the Baby Boomers, Generation X, and the demographic that launched a thousand clickbaits, the Millennials.

Like any great word book, From Skedaddle to Selfie provides dozens, probably hundreds, of pleasant surprises and interesting facts that will differ for each reader. I've been inhaling the old Batman series on DVD, so my Bat-ears perked up when Metcalf discussed chum — a word of the wholesome G.I. Generation, born 1901-1924, as well as the Caped Crusader. I'm part of Generation X, which fills me with very little shame or pride, but I was still self-centeredly intrigued by Metcalf's representations of my ilk. Apparently, we're the generation of geeks, nerds, and dorks — that seems about right. I was talking with a fellow Generation Xer the other day about this book, and he wholeheartedly agreed with Metcalf's selection of whatever as an accurate representative of the slacker generation.

Metcalf also shows how words mutate across the generations. For example, hip (along with hep and pep) were used by the Lost Generation, but hippie was a characteristic word of the Boomers. Hipster — a coinage of the Silent Generation — has become a major Millennial word, often used insultingly for skinny-jean-wearing, handlebar-mustache-having, vaping youngsters who are perhaps trying a little too hard to be hip. Who knew hipness, in all its permutations, was such an enduring concept?

Metcalf's chapter on the much-maligned Millennial generation is particularly refreshing. In these days of mindless Millennial-bashing, it's great to see a writer take a more reasonable approach. I love Metcalf's description of a notorious word: "Selfie is an almost perfect word. It's transparently about the self. It's selfish, but the diminutive suffix  -ie makes it cute selfish instead of mean selfish. And it is quite literally a self expression, in both senses of that term. For the Millennials, it's a gift of their self to the watching world." Maybe the Millennials will get a break soon, because there's already a name for the generation born in 2005 or after: the Homeland generation, so-named because the homeland became an important concept post-9/11. I'm sure they'll be the ruination of humanity next.

This is one of Metcalf's most subjective books, which he acknowledges in his introduction. There isn't any infallible, scientific way to say "X word belongs to Y generation." In fact, many of these words span multiple generations. But when making such judgement calls, you couldn't ask for a better judge than Metcalf, whose deep research and common-sense approach provides strong support for his choices. Even if you're a Generation Xer who feels Metcalf has wronged you by including, say, you guys, it's hard to deny the thoughtfulness and research behind the choices.

This book is such a natural idea I'm surprised it didn't exist already. Unless you've time-traveled from the distant past or future, you can see a little of yourself in this book, and it gives you plenty of ammunition for learning (and complaining about) all those geezers and whippersnappers. Even a Gen X dork like me can't say whatever to this excellent book. I'll borrow a word from the Boomers and say it's downright awesome.