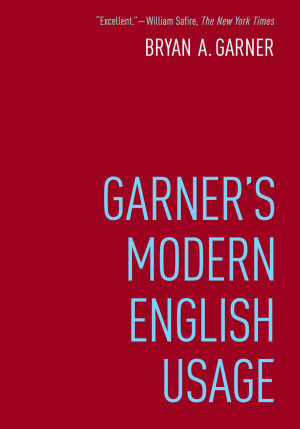 I write a lot of stuff.

Besides my column on euphemisms here, I have a column about comedy in McSweeney's. I write about comic books in places like Paste and Salon, and I have the unique title of Comic Book Editor-at-Large for dog magazine The Bark. A software company pays me to write white papers, and I've written copy for a gift company. I also tweet too much. Lately, I haven't written many humor pieces or comedy sketches, but I'll get back to it. When I'm really fortunate, I even get to write a book. Besides all that, I teach writing at a few colleges.

No, I didn't mix up this book review with a job application, and I don't mean to brag (well, maybe a little). I just wanted to preface this review with the fact that I do a ton of writing for different audiences, with different purposes, and in different genres. So a book like Garner's Modern English Usage, which just released its fourth edition, is potentially a damn useful thing to me. And after looking through Bryan A. Garner's latest, I can report that the potential is realized: this is an extremely useful and sensible guide. I don't know if I would sleep with it under my pillow, but I won't keep it far from my desk.

The opening essays set the table for what follows. Garner, who describes himself as a "descriptive prescriber," gives a thorough examination of the descriptive and prescriptive philosophies in "Making Peace in the Language Wars." While that war is often discussed simplistically—with anything goes, sandal-wearing, anarchist descriptivists on one side and grim, jackbooted, eat-your-vegetables prescriptivists on the other—Garner shows that both sides have a lot of merit, and it's difficult and unrealistic to completely embrace either extreme.

Garner explains what lexicographers, linguists, editors, word mavens, and other experts think about language and where he fits in, which is as a prescriptivist who is impressively well-researched on current and past language usage. Since this is a usage guide, it's logical that Garner leans toward the prescriptive side, which he describes like so: "Prescribers want to evaluate linguistic change as it occurs. They endorse the changes they consider fortunate and resist the ones they consider unfortunate—often with little success in the long run." But whether the changes are fortunate or not, Garner provides a great sense of the lexical landscape, so readers can make smart, informed decisions.

Far from a dispassionate guide, Garner lets his opinions fly, which is exactly what you want from a usage guide as opposed to a dictionary. He describes the ever-annoying irregardless as "a semiliterate portmanteau word from irrespective and regardless" that "should have been stamped out long ago." After admitting that the word is "common enough in speech that it has found its way into all manner of print sources," he calls it a "barbarism" before leaving the reader with this advice: "Although this widely scorned nonword seems unlikely to spread much more than it already has, careful users must continually swat it when they encounter it." Even if you think it's ridiculous to call any word a semiliterate barbarism, there's no question that irregardless is, for better or worse, just as "widely scorned" as Garner says. You'd be a fool to use it any writing meant to impress.

I found myself looking for Garner's take on hot-button language issues, including singular they. Garner provides a long, thorough discussion of the many other options, then sensibly acknowledges its use, but you can tell he doesn't like it: "That it sets many literate Americans' teeth on edge is an unfortunate obstacle to what promises to be the ultimate solution to the problem." That feels a bit passive-aggressive to me, but maybe I've just been spending too much time on Facebook. Still, that's an accurate assessment, and no reader could complain about a lack of examples or context on this evolving issue. That thoroughness is a strength throughout this guide.

Maybe it's my own language nerdiness, but I appreciate this book for far more than its practical applications: I found myself flipping through it, looking for lexical factoids that I'd never thought about before, and I found plenty. Curious readers will learn the correct pronunciation of Nabokov, what to do about capitalizing names like e.e. cummings, how thirtysomething spread –something as a suffix, the difference between enervate and innervate, and why copartner is an unnecessary, redundant word. You could host a weekly Word Trivia Night just using this book, and maybe I will.

Garner also shows a sense of humor, writing a one-page summary of "The Ongoing Tumult in English Usage" using only errors, such as "For all intensive purposes, some linguistic shifts may pass mustard, even those that don't harp back to Middle English or Early Modern English." That summary also demonstrates Garner's strong knowledge of current usage, warts and all, giving weight to his suggestions. Prescriptivists have a reputation for cheery-picking or ignoring history and evidence, but that's description certainly doesn't fit Garner.

Whether you're writing fiction or nonfiction, formally or informally, for print or the web, you'll find Garner to be a helpful adviser—not advisor, by the way. Though both spellings are pretty common, Garner points out that adviser has a much longer lineage and is still more accepted, so I'll go with that. It's a small thing, but so are most writing issues, and this big book makes all those little nuts and bolts of English easier to handle.