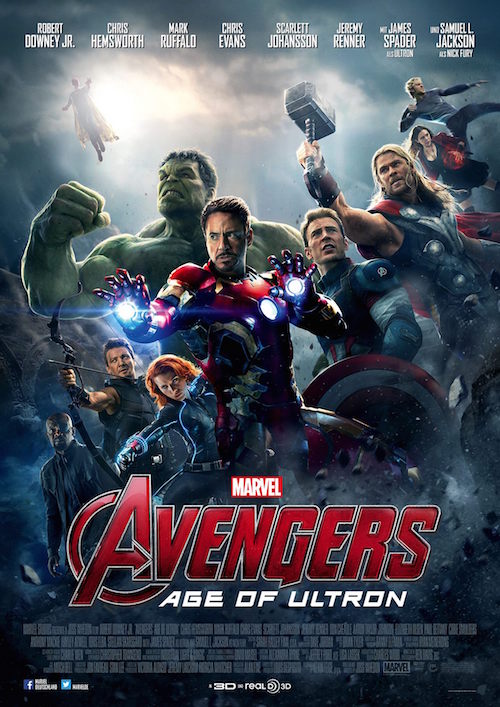 Following the enormously successful release of Avengers: Age of Ultron last weekend, Slate's words correspondent Katy Waldman had this bone to pick with the film franchise.

Sure, I enjoyed the intragroup banter and the rollicking action.…But the movie did nothing to dispel the central confusion I’ve always had with the unstoppable Marvel franchise: Why are they called the Avengers? What are they avenging?

After completing an exhaustive search for any breath of authentically vengance-y vengeance story (and finding nothing to satisfy), Waldman calls out franchise writer and director Joss Whedon in heroic terms.

Joss Whedon! Scribe of snappy dialogue and director of Shakespeare! You know that words have meanings. You cannot call people Avengers if they do not avenge things, any more than you can identify your stove as a dishwasher or your auto mechanic as the Attorney General of the United States. Have words somehow harmed you, that you now betray them so? Was it outright hostility to the Oxford American Dictionary that made you allow the Maximoff twins onto the team only after they renounced their scheme to make Tony Stark pay for the murder of their parents? That predicated Quicksilver and Scarlet Witch’s membership in the Avengers, in other words, on them not being avengers?

It’s maddening. Especially when you consider the many apt names for analogous groups of superheroes—The Fantastic Four, the X-Men, the Justice League—Avengers-gate cries out for redress. Vengeance, even. Because if we can’t protect the English language, you can be damn sure we’ll avenge it.

Waldman's piece puts us in mind of lexicographer Neal Whitman's observation that, at least in movies, "Avenging and vengeance are for good guys, while revenge is for the bad guys." To explain how these connotations attached themselves to these closely related words, he takes us through an equally-exhaustive history of their evolution.

Avenge, revenge, and vengeance (along with vengeful and the semi-archaic revengeful), all come from the Latin verb vindicare, the source of modern English vindicate (what good guys do) and vindictive (what bad guys are). The original meaning was to claim as one's own, and figuratively, to protect, and still more figuratively, to avenge. In Old French, it developed into venger, which was borrowed into English as the verb venge in the early 1300s. (In this case , the -er is not an agentive suffix, but an infinitive marker.) Alongside venger, Old French also had the verb avenger, with the prefix a- meaning "to, toward." Despite the prefix, avenger meant pretty much the same thing as venger, and was borrowed into English as avenge in the later 1300s. A couple of centuries later, English also borrowed the Middle French verb revenger. In this word, the prefix re- has its sense of returned action rather than repeated action. Of the three verbs, only avenge has survived to the present day as a commonly used verb. Venge is altogether archaic, last cited in the Oxford English Dictionary in 1915, and revenge survives mainly as a noun.

According to the Merriam-Webster Dictionary of English Usage, there is widespread agreement among usage manuals that avenge has connotations of just and righteous retribution, often one another's behalf, while revenge has an idea of possibly unjust retaliation, undertaken on one's own behalf. However, MWDEU adds, "Our evidence shows ... that the distinction is only sometimes observed," and they provide examples such as, "...bands of Maryland men set out to revenge the deaths of their comrades," and "its outraged victim finally avenged himself." Even so, the distinction seems to be live enough to have a noticeable effect on film and television titles.

A distinction that MWDEU and Random House Unabridged Dictionary gloss over is that in addition to the difference in connotations between avenge and revenge, there's a difference in syntax. That is, avenge is a verb, while revenge is almost always used as a noun. In the Corpus of Contemporary American English, every one of the 700 examples of avenge is a verb, while less than half of 1% of the total attestations of revenge are verbs (26 out of 4704). So if you're one of the many speakers for whom revenge is only a noun, what do you do when you want a verb that means to exact one's own (possibly unjust) punishment? Well, you can say "exact one's own (possibly unjust) punishment," or "get even," or (if you're British) "get one's own back," or use revenge in combination with a verb like get or take. Or you can ignore the connotations about justice or malice, ignore the mismatch in prefixes, and just use avenge as a verb-equivalent of revenge, in kind of the same way as we treat remember as a verb-equivalent of memory. That might well be the source of some of the attestations of avenge used in a situation that would otherwise favor revenge.

Furthermore, the fact that avenge is only a verb may also explain why the noun vengeance tends to go with the good guys in movie titles the same way avenge does. If you're looking for a noun form of avenge to name something the heroes are doing, the negative connotations of revenge make it a bad choice. The closest-related other noun form is vengeance, so there you are. Sure, it's a little weird that the noun form is vengeance instead of *avengeance, but that's just one of those things about English — like memory and remember again.

So maybe Whedon is just playing on the fact that the name "Avengers" puts his characters squarely in the good guy camp, whether they earn the name or no.

Or maybe he's just hoping that the implied promise of an eventual vengeance storyline will keep the dictionary-reading subset of his viewership coming back for more.