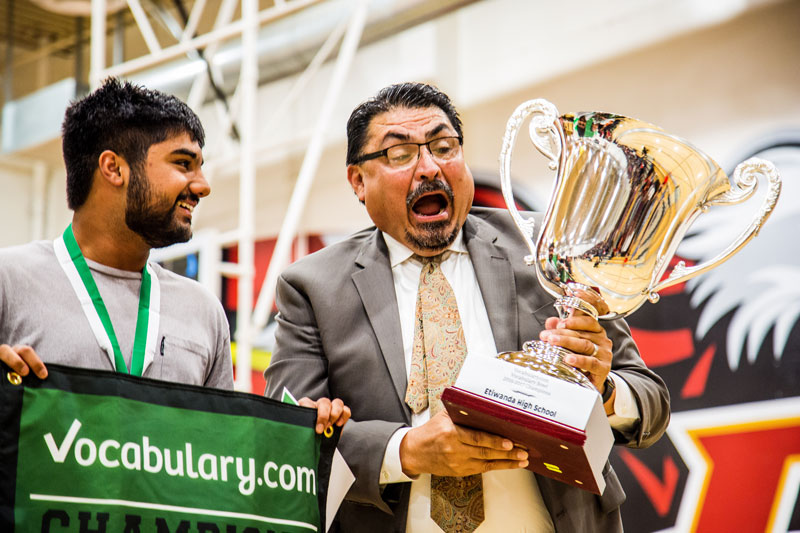 Brazen was the word used by many to describe the Etiwanda High School Eagles' ascent to North American Vocabulary Bowl Champion at their high-octane awards celebration held at center court in the EHS gymnasium.

Among those congratulating the students and teachers on their extraordinary accomplishment were Etiwanda High School Principal Donald Jaramillo, Chaffey Joint Union High School District Assistant Superintendent James Cronin and Vocabulary.com CEO Michael Freedman. All three used brazen to characterize the Eagles' rise to the top of the Vocablary.com leaderboards.

Why brazen? Besides being one of the words that many students worked hard to master, brazen captures how the Eagles exploded out of the gates back in September — the last month of the Vocabulary Bowl preseason — with their first-time monthly win, as if to announce to the world of competitive word-learning that they were one to watch this year. During the seven month Bowl season, Etiwanda snagged three more banners and ultimately bested 38,828 other schools to perch atop the overall words mastered leaderboard once and for all on April 30, 2017. The Eagles mastered a collective 365,451 words to win the Vocabulary Bowl and set a new record for most words mastered in one season.

At the awards celebration honoring their extraordinary academic achievement, hundreds of students filled the school gym — with people, with pride, and with noise. The crowd erupted in applause when English teacher and champion of word-learning Stacey Roozeboom called the top ten students and top five teachers to the podium.

After they were recognized, the top one hundred students flooded the podium to receive medals and certificates of recognition. And while the number of students on center court was an impressive sight, it was a fraction of the word-learning effort mounted by Etiwanda. Over one thousand students mastered 150 words or more, making this a school-wide effort and demonstrating that vocabulary learning is indeed a team sport.

After more words of congratulations and encouragement from Mr. Jaramillo, Mr. Cronin and Mr. Freedman, the big moment finally arrived  — the presentation of the Vocabulary Bowl Champions trophy and banner. There's something about hoisting a gleaming silver cup in the air that puts a look of pride on people's faces, and that expression spread across hundreds of faces as the reality of Etiwanda's accomplishment sank in.

Bringing the awards ceremony to a thunderous close was another nationally recognized Etiwanda team  —  the school's epically talented Winter Drum Line. With a stirring performance that reverberated up to the ceiling and into everyone's bones, the drum line's messages of the power of words and being a part of something larger than yourself pretty much said it all.

The Vocabulary.com Team extends a huge "thank you" to Etiwanda's school leadership, staff and students for hosting the spectacular awards celebration that capped off their win and another fantastic Vocabulary Bowl season.

Click here to read more articles from Announcements.
Blog Departments
Announcements Tips & Tricks
Editors Picks:
Eagles Soared, Spartans Vanquished in Biggest Vocabulary Bowl Ever
May 5, 2017
The Final Vocabulary Bowl Buzzer Has Sounded!
May 1, 2017
Etiwanda Eagles Reclaim Their Perch Atop the Leaderboard
December 2, 2016
Other Articles About
Vocabulary Bowl
Thanksgiving Break Roundup: Schools Trot to the Top of the Leaderboards
December 3, 2021
Join us for a Thanksgiving Break Away with Words Challenge!
November 15, 2021