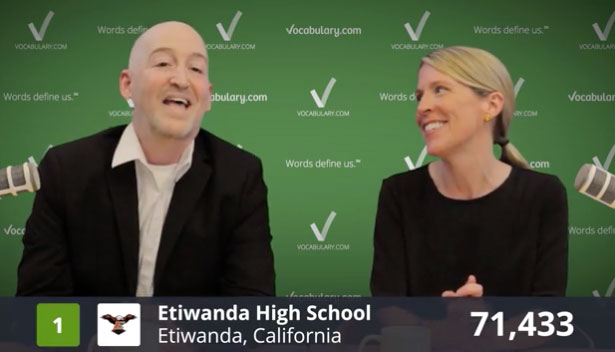 What a difference a month makes, and March was an absolute stunner in the highly competitive Vocabulary Bowl world.

For only the second time in the 2016 - 2017 season, a middle school mastered the most words and earned the glorious green Champions Banner. Making this an even bigger surprise, it was not the middle school that's been dominating their division for two years now, Lanier of Houston. So, who bested Lanier Middle and Etiwanda High — the most dominant schools in the competition this season?

Margate has been integrating vocabulary improvement into everyday teaching and learning for a few years now, and the initiative has spread throughout the district. In fact, 4 of the top 10 high schools and 2 of the top 10 middle schools in March hail from Broward County alone, more than any state in the nation. While lots of folks across the country were on vacation these past few weeks, Broward County students maintained that daily commitment to word learning. But what made last month in particular a breakout Bowl success for Margate's Spartans?

It all started with Margate's Principal Toliver launching a March Madness challenge. Mr. Toliver has been known to offer daily and monthly challenges before, with winning teams within the school earning a pizza party or some ice cream. In March, he offered a few more incentives and channeled his inner coach (Toliver is a former Math teacher and basketball coach), and worked with the entire Margate staff to see what the Spartans could do if they attempted their best word-learning effort ever.

What does that kind of effort look like? It may surprise you that a lot of it is integrated into everyday teaching and learning. Students at Margate consistently spend some time each day dedicated to word learning in most subjects, and many teachers have created games and projects to take it to the next level. Students were also given homework to practice assigned lists and play the Challenge, the adaptive game which gives each learner personal words at just the right level of difficulty. While the March Madness challenge definitely heated up Bowl Fever for a few weeks, Margate's success is just as much about their long-term commitment to word learning.

Once the March Madness challenge sparked that extra intensity in these young academic competitors, the Spartans took it so seriously that they started posting huge words-mastered totals on the Vocabulary Bowl leaderboards, and soon realized that if they kept the drive going, they just might be able to claim the title of monthly "Vocabulary Bowl Champion" for the first time.

Keep it going they did. In the second half of the month, the Spartans finally seized the March lead from Lanier's Mighty Purple Pups. In the end, Margate triumphed by mastering 85,912 words. This staggering number not only earned them the title of March Champion, it set a new Vocabulary Bowl record for most words mastered in one month.

Think that's drama enough? It gets better. Because the Spartans have been focused on vocabulary improvement across the curriculum all year long, they already had a strong position in the overall ranks. But their March earnings were so significant that Margate is now within striking distance of becoming the leading middle school for the entire season.

Stay tuned for the action that unfolds in the next couple of weeks as the 2016 - 2017 Vocabulary Bowl season comes to a close at midnight on April 30th. Watch the leaderboards and check back for the final results and all the fanfare that goes along with our big season finale, including trophies and medals at the top schools.

Want your school to have a shot at Vocabulary Bowl greatness? Even though the official season ends in April, the competition continues all year long, with monthly banners awarded May through September. It's the perfect chance to keep the word learning going throughout the summer and to get your school hooked on the Vocabulary Bowl.