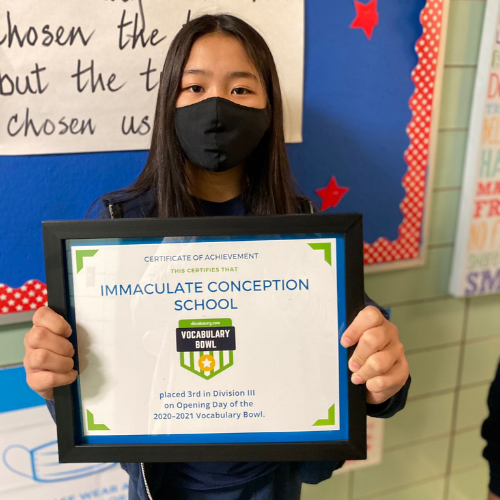 The new Vocabulary Bowl's season got underway last month, and schools from all across the map blasted out of the gates to put up staggering stats in October.

Small Schools Off to a Huge Start

Scores of small-but-mighty Division III schools — serving fewer than 500 students — are proving once again that in the Vocab Bowl it's not about size, it's about effort.  Div. III contenders made up half of the overall Top Ten on opening day.

The students at McKenzie mastered a whopping 5,070 words, a total that not only snagged them the Division III lead for the day, but also put them atop the overall leaderboard on October 1. It's a bold start for the Rebels, who finished last season in the Division III Top Ten, and it looks like they've got their sights set on snagging the Div. III Champion title this season.

Eagles Take Off in October

Reigning four-time Vocab Bowl Champions Etiwanda High School of Etiwanda, California came soaring out of their perch atop the leaderboards, mastering 72,812 words in October to snag their 27th monthly win. The Eagles are already out front this season with a nearly 30,000-word lead over Cincinnati's Walnut Hills. The students at EHS vacuum up the vocabulary with vigor and velocity, so any school that wants to beat them this year will need to mount a serious world-learning effort early in the season.

Congratulations to Great Neck North Middle School of Great Neck, New York, the October Middle School Champions! The Blazers mastered 40,831 words last month, almost 15,000 more than Houston's vaunted Bowl veterans Saint Vincent De Paul School. Hialeah Gardens Middle School came in a very close third, just sixteen words behind Saint Vincent de Paul, giving us a preview of a couple of very close races to watch this season, both in the Middle Schools and Division II, with 500—999 students. Both Great Neck North and Hialeah Gardens are in Division II, so brace yourselves for some nail-biting moments as students go all-out with word learning to put their school on top and bring home the title and the trophy at the end of the season in May.

Florida is always a hot Vocabulary Bowl state, and this year looks to be another scorcher. Hollywood Hills and Saint Thomas Aquinas are in a close race, separated by fewer than a thousand words, and Charles W. Flanagan School is right behind them. Margate Middle School is back in sixth place, but it would be a big mistake to count out the Spartans just yet since they've won or come in second place for each of the last four seasons and are the most decorated middle school in Bowl history.

The season may be underway already, but It's never too late to get your school involved in the Vocabulary Bowl. We award champions banners each month all year long, and the sooner you join the sooner your students can start building their vocabulary knowledge and building their Vocab Bowl momentum. With county, state and division leaderboards where you can vie for the top each day, week and month, there's a level of competition that's right for every school. Here's how to get involved and put your school on the map.