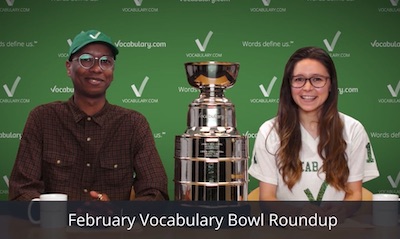 With just two months to go in this year's Vocabulary Bowl, students are pouring on the effort, learning words in unprecedented numbers.

The Etiwanda Eagles extended their lead over Walnut Hills in the High School Division, winning February with 73,628 words. With over 40,000 words now separating the two front-runners, Walnut Hills will need a couple of stellar months if they want to unseat Etiwanda as North American champions. 2020's breakout High School, Mater Dei, is holding steady in third, with Buckingham Charter coming up in their rear-view mirror and Hollywood Hills holding steady in fifth place. After that, there's a closely-packed group rounding out the top ten, and a couple others — Cliffside Park and Bellaire — in strong positions to make a push and snag a top ten banner when the season concludes.

Middle Schools On A Tear

Defending middle school champion Margate Middle mastered 55,721 words in February, enough to beat McAuliffe for the first time this season. The Spartan's surge also earned Margate its 30th Florida State Champion title and its 36th North American top ten finish. But in the overall season, McAuliffe is still way out in front of the middle school pack, with Margate and Hialeah Gardens looking pretty secure in second and third and the rest of the top ten still up for grabs. Will William Dandy, currently in 11th place, be able to catch Sycamore and break in? The top ten schools in each division will win hang-in-the-gym-worthy banners at the end of the season.

In Division III, the Ashe County Bulldogs are still nipping at Buckingham's heels, and this race looks like it will go down to the wire. Blanson made a big push last month, learning 21,872 words to win their first-ever Texas State Champion achievement badge. In Division II, Great Neck North maintains its dominant lead, but there's still a close battle between Pines, Wheelersburg, and Sycamore for second place, and the rest of the top ten is a pretty close group. With a tight scrum of seven schools just below them, any one of which could easily break in, keep an eye on this race over the next two months.

The Vocabulary Bowl leaderboards are structured so that schools of every size can compete at the county, state and national level on a daily, weekly and monthly basis. In addition to awarding monthly champions banners to the top high school and the top middle school year-round, we also award banners to Division and State winners at the end of the academic season. This year's competition started on October 1st, so now is the perfect time to learn more and get your students signed up to play, compete and learn in the Vocabulary Bowl.