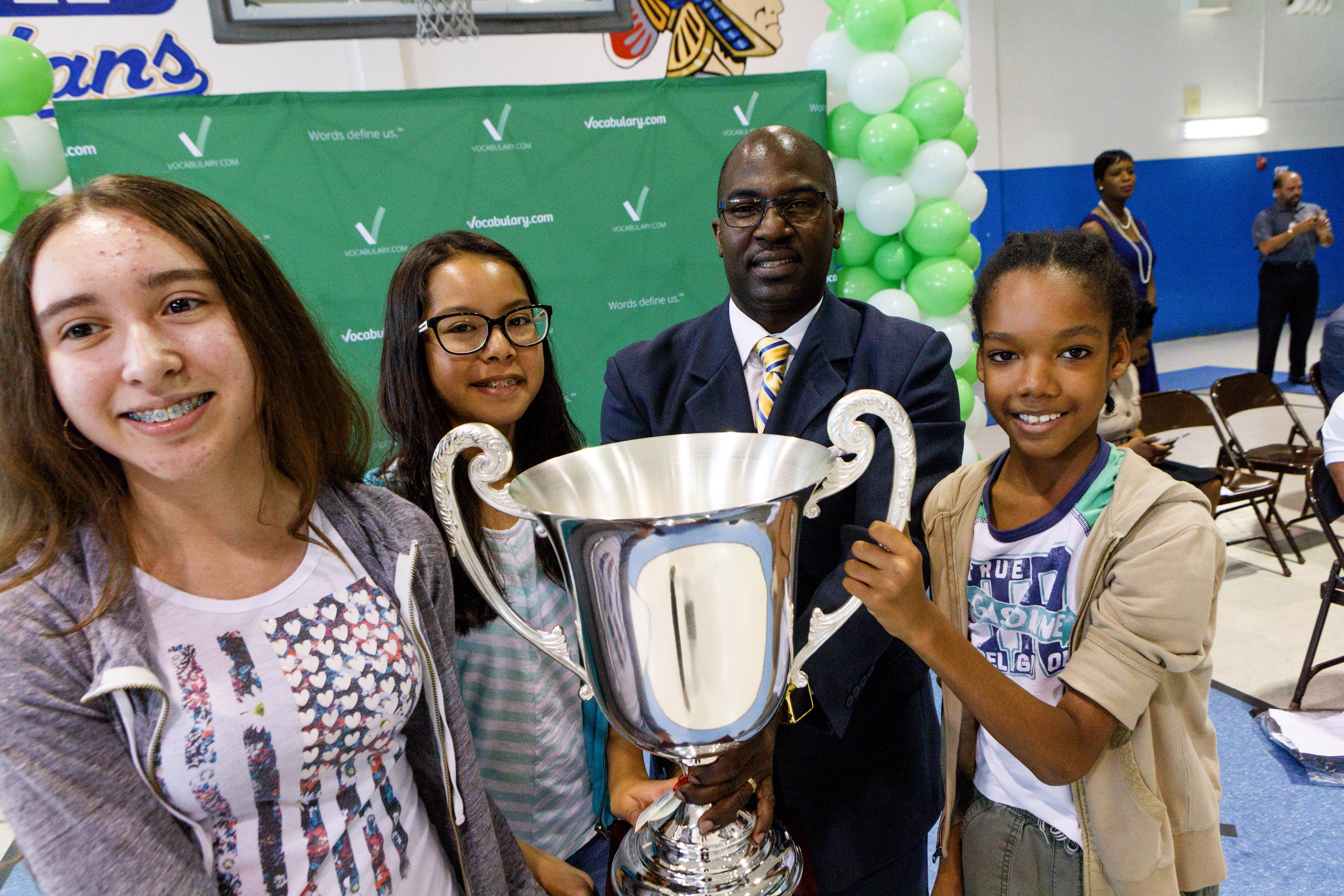 The 2019–2020 Vocabulary Bowl has ended, and the preliminary results are in!

But before we get to which schools are the projected division champions, we want to congratulate all of the schools across North America that participated in this year's competition. Together, you made it the largest Vocabulary Bowl to date by every measure. Just how big was it? The statistics are staggering.

A record number of students — 1,609,002 to be exact — from 47,000 schools competed in the 2019–2020 Vocabulary Bowl. Each and every student who mastered a word played a part in exceeding the monumental goal that we set for this season: surpassing the 40 million words mark. Together you blew that figure away, mastering a collective total of 41,586,318 words between October 1st and April 30th.

The Vocabulary.com team is certifying the official results, but in the meantime we are releasing the projected winners and runners-up in the major divisions. Drumroll please...

The provisional Vocabulary Bowl Champion is defending champ Etiwanda High School of California with more than 428,000 words mastered. This is the fourth straight overall win for the Eagles, who also won the Division I title and the California State Champion banner. And in another repeat for a seasoned Bowl contender, it looks like Walnut Hills High School of Ohio will once again be the overall runner-up. The WHHS Eagles mastered more than 394,000 words this season, a haul which also earned them the title of Ohio State Champ and Division I Runner-Up.

After two years chasing their first middle school title, it looks like this is finally the year for McAuliffe Middle School of California. McAuliffe is being declared the provisional Vocabulary Bowl Middle School Champion, with an impressive total of more than 288,100 words mastered. Just behind them with nearly 254,500 words is the projected runner-up, Margate Middle School. Margate also finishes as the projected Florida State Champion for five years running. Margate's Spartans came into the 2019–2020 season with three straight titles under their belt, but this time around McAuliffe's Eagles came out of the gates stronger than ever and mustered the sustained, school-wide effort that's required to end the year at the top of the leaderboards.

In Division III, schools with fewer than 500 students, two of the most well-known Bowl contenders came out on top of the high school and middle school leaderboards. The projected high school winner is defending champs Buckingham Charter Magnet High School of California with 183,262 words mastered. The Knights, led by English teacher "Larry Lexicon," now have 3 Div III titles under their belts. Another veteran team is the projected high school runner-up in Division III — Blanson Career and Tehcnical Education High School from Texas. The Division III Middle School Champion looks to be Ashe County Middle School of North Carolina. The Bulldogs declared back on October 1st that they were in it to win it this year, and with more than 167,100 words mastered it looks like the trophy is theirs. Ashe County also caused what appears to be the most stunning upset of the Bowl season. In the final day of the season, the students waged a sneak attack on defending North Carolina State Champs Harris Road and at 11:15 p.m. overtook the Patriots to become the projected champs in the Tar Heel state.