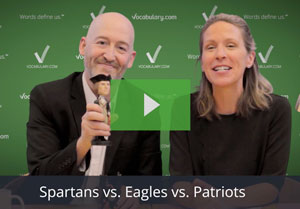 December did not disappoint when it comes to drama on the Vocabulary Bowl Leaderboards.

One of the most thrilling parts of the Bowl is that sense that every student who plays is a part of something so much bigger than themselves, and the stats on just how big are pretty exciting. The students across North America have mastered a collective 14,464,927 words so far this season — 3 million more than this time last year. Thanks and congratulations to all of you!

A New Champion is Crowned
After a tough defeat in November when their early lead was snatched back by defending champs Etiwanda, the students at Francis Lewis High School knew they'd need to muster a massive word-learning effort if they wanted to claim the title of Vocabulary Bowl Champion.

The Patriots wasted no time in December, mounting an attack on day one and taking the early lead. The big question was, could the Patriots hold on over winter break, or would the Eagles peck their way back to the top, one word at a time, like they did in November?

This time the Patriots remained relentless, mastering over two thousand words a day. When the ball dropped on New Year's Eve, the students had mastered 63,827 words to earn their first Vocabulary Bowl Champions title by a margin of nearly 30,000 words. Congratulations to Francis Lewis, a school that's going to make the rest of the season very interesting to watch, indeed.

Steadfast Schools in Middle School Division
Margate Middle School cemented its lead in the Middle School division with 44,251 words mastered in December to bring their season total to over 150,000 words. And while the Spartans at Margate consistently top the leaderboards, other schools are just as steadfast in their commitment to vocabulary improvement. Schools like Lanier Middle and Tomahawk Creek show up in the Top Ten month after month, and we congratulate their students and teachers for their hard work.

Want Bowl Fever to spread at your school? It's never too late to get involved, so check out the Vocabulary Bowl details here. We'd love to hear how your school is getting into the Bowl action, so send us an email or Tweet what you're up to @VocabularyCom.