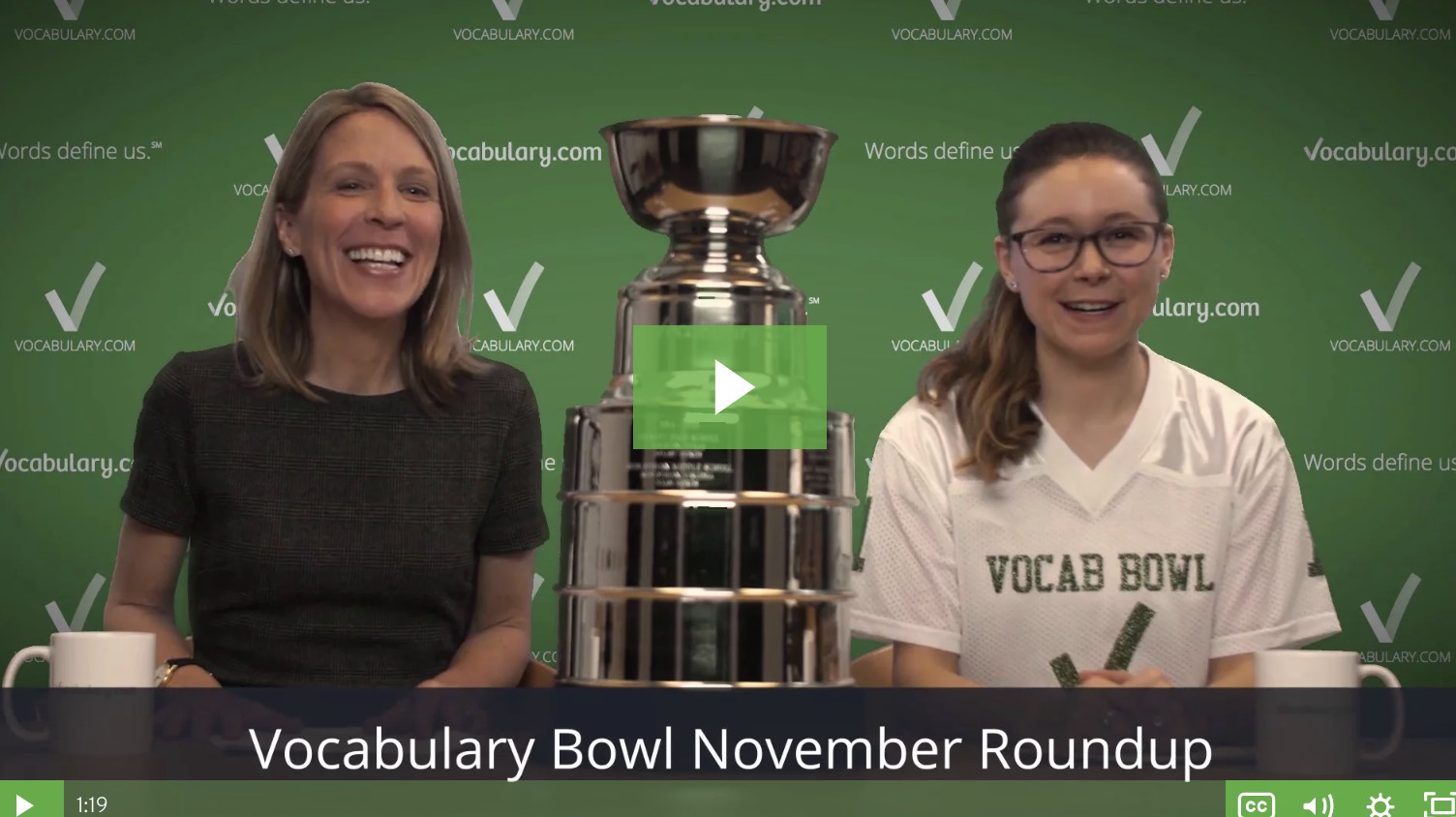 The weather might be getting colder, but the competition is heating up on the Vocabulary Bowl leaderboards!

Heroic word-learning efforts catapulted newcomers into the top ten, and some close division races have Bowl fans on the edge of their seats. Students across North America mastered 6,286,752 words — 700,000 more than November of '18. That's two record-breaking months in a row, setting the stage for what could be the biggest Bowl season ever.

On the overall leaderboards, defending North American champions the Etiwanda Eagles won November handsomely with 73,252 words. Cincinnati's Walnut Hills took second, mastering 68,134 words. While Etiwanda holds a commanding lead, Walnut Hills still poses a threat to their future dominance and this could be their break-through year.

Two Division III schools, Ashe County Middle School and Buckingham Charter High School, are punching way above their weight to make it to the overall top ten, a field that's crowded with Division I schools that are quadruple their size. What's spurring them on? The race for the Division III title! It would be a huge upset if the middle schoolers from Ashe County could unseat the high schoolers from Buckingham, the back-to-back defending champs.

The other big story for November is how the newcomers stormed the leaderboards. Brooklyn's James Madison High School made a big splash, cracking the top ten for the first time and winning New York State in the process. This is a big deal for a school that finished 894th last season — they've already mastered eight times as many words as they did in all of last year. Saint Thomas Aquinas High from Fort Lauderdale, another exciting rookie contender, is off to a strong start this season. The Raiders came in second in Florida and eighth overall, up from 1,924th place last year.

In the Middle & Elementary School Division, all eyes were on Ashe County Middle School. ACMS's hard-working students continued to light up the leaderboards right through Thanksgiving break, taking advantage of the holiday lull to expand their lead. The Bulldogs mastered 48,017 words to win their first Middle School Champion banner, and they're only 16,000 words away from meeting their principal's challenge to master 100,000 words this season. If they make that goal — which they should easily blow past in December — then Mr. Farmer will sleep in a tent on the school roof next spring, giving new meaning to the phrase "future tense."

Other November highlights include a strong showing by Hialeah Gardens Middle School, the Florida State Champions for the month. Thanks to consistent effort, in just the last two months HGMS students have already mastered 75 percent of their previous season's total of 103,000 words.

Middle schools continue to outplay High Schools in Division races, too. Great Neck North Middle maintain its grip on the top spot in Division II, but there's a large cluster of middle schools contenders — Pines, William Dandy, and Wheelersburg Middle — in good positions to make a move on first place.

And despite a rare second-place finish in November, McAuliffe Middle School still maintains the lead in the Middle & Elementary School Champions race for the season. The Eagles have been runners-up for two years in a row, and it looks like this could this be the year they soar all the way to the top.

Besides the sheer volume of words mastered, this fast-moving season is already standing out for its close races and frequent lead changes. We'll be bringing you all the updates, so stay tuned!

Want to get in on the action? Great news! No school is too small, too inexperienced, or too late to compete in the Vocabulary Bowl! The Bowl leaderboards are structured so that schools of every size can compete at the county, state and national level on a daily, weekly and monthly basis. In addition to awarding monthly champions banners to the top high school and the top middle school year-round, we also award banners to Division and State winners at the end of the academic season. Remember, every school has to start somewhere, so why wait to start improving your students' word power? Here's how to get involved in the Vocabulary Bowl.