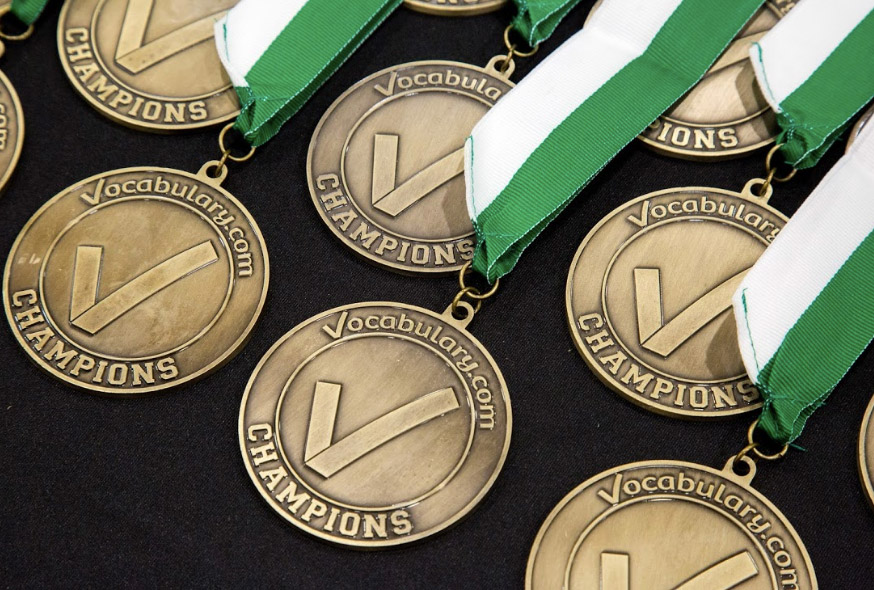 But before we get to which schools are the projected division champions, we want to congratulate all of the schools across North America that participated in this year's competition. Together, you made it the largest Vocabulary Bowl to date by every measure. Just how big was it? The statistics are staggering.

For the first time ever, the number of students playing passed the one million mark. 1,182,635 students from 41,278 schools participated this year. Each and every student who mastered a word played a part in exceeding another monumental goal we set for the '17 - '18 season: surpassing 30 million words-mastered. Together you blew that figure away, mastering a collective total of 32,489,125 words between October 1st and April 30th.

Play continued until the final seconds of the competition — literally. Fun fact: the school that mastered the last word before the final buzzer sounded was Hawaii Vocabulary Bowl State Champion Ewa Makai Middle School of Ewa Beach. A student at Makai Middle squeaked in the last word at exactly 11:59:18 Hawaii Standard Time.

Which schools topped the leaderboards?

The Vocabulary.com team is certifying the official results, but we are proud to announce that the provisional Vocabulary Bowl Champion is Etiwanda High School of Etiwanda, California with a mind-blowing 421,222 words mastered. This is the second straight title for the Etiwanda Eagles, who also won the California State Champion banner.

The provisional Middle School Champion is Margate Middle School of Margate, Florida with 298,390 words mastered. This makes back-to-back titles for the Spartans, who also earned the Florida State Champion Banner.

In Division III, schools with fewer than 500 students, two schools battled it out until the final hours of the competition. Despite having an early lead in April, East Early College High School of Houston could not hold off a surge by the projected winner, Buckingham Charter Magnet High School of Vacaville, California. The Knights at Buckingham mastered 201,820 words, edging out EECHS by only 8,279 words.

In their final charge, the BCMHS Knights mastered a total of 97,050 words in April and set a new Vocabulary Bowl record for the most words mastered by a school in one month. The previous record of 85,912 words was set by Margate Middle School in March of 2017.

For the first time in the history of the competition, the top school in each U.S. state and Canadian province will be awarded a Vocabulary Bowl State Champion banner. For those results, visit the overall leaderboard and then click on "All State & Provinces" to drill down and see the final rankings.

Congratulations and thank you again for participating in this colossal effort to expand the vocabularies of millions of learners. We here at Vocabulary.com are already looking forward to setting next year's goals — and watching all of you amazing schools, students, and teachers work together to exceed our expectations once again.

Keep in mind that although the official season has ended, there’s a monthly Vocabulary Bowl Champion banner up for grabs year ‘round. Learn how to get your school involved here.