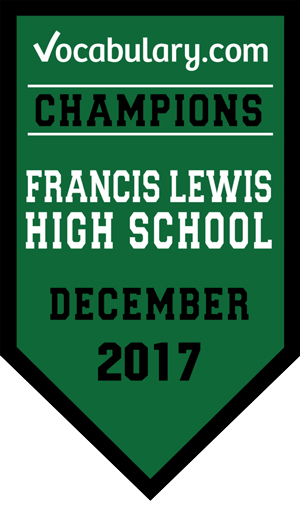 What was the secret to their success?

How did Francis Lewis High School master 63,827 words in December to reign as Vocabulary Bowl Champions for the month?

"We practiced every day." That was the simple answer given by one of FLHS's students after she and her peers were awarded the prestigious Vocabulary Bowl Champions Banner in the school library.

The presentation was attended by Principal Dr. David Marmor, Assistant Principal of ELA Sean Johnson, and ELA teachers Victoria Larsen and Jennifer Lewis, all of whom have been huge supporters of their students' commitment to word-learning.

Dr. Marmor was among many fans who spent New Year's Eve watching the Vocabulary Bowl leaderboards while the Patriots toiled late into the night to clinch their first win. His students kept the name "Francis Lewis High School" flashing green with every word mastered right up until midnight. When all was said and done, a wide margin put FLHS well above defending champion Etiwanda. It was sweet redemption after the Patriots had fallen to the Etiwanda Eagles in November.

This is just the beginning for Francis Lewis High School, which currently ranks second on the Overall Words Mastered Leaderboard. They’ve got the key ingredients assembled for future success: their teachers are integrating List practice with their ELA curriculum, their students have made daily word-learning a habit, and their school leaders are on board.

Congratulations once again to the Patriots of FLHS. We look forward to seeing how far you can go in the Vocabulary Bowl this season, and beyond.