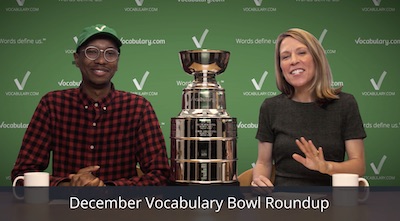 The new year started with new record-setting totals and and new schools atop the Vocabulary Bowl leaderboards.

The defending North American champion Etiwanda High School maintained its lead on the overall leaderboard, but frequent runners-up Walnut Hills High School is coming up fast in the rear view mirror. In the High School Division, Walnut Hills dethroned the Etiwanda in December to snag its second monthly champions banner. Is Etiwanda showing some vulnerability? Could this finally be the year for WHHS to go all the way? Given that these top contenders regularly master 50,000 or more each month, the 10,000 words that now separate the two schools is a razor-thin margin, and with four months left to go it's looking like the High School Division race could go down to the wire on April 30th.

Middle Schools Are Not Middling

After coming in second to Ashe County Middle School in November, McAuliffe Middle is back on top, winning the Middle School Division title for December and expanding their lead for the season with more than 149,000 words total. Ashe County, a contender for Division III champion, is holding on to second place among Middle Schools with more than 111,000 words mastered so far. Three schools — Hialeah Gardens, Great Neck North, and Tomahawk Creek — are jostling for third with just a few thousand words separating them.

Domination and Close Competition in Divisions II and III

In Division II, two New York schools are frontrunners in the trophy race. Great Neck North leads Division II Middle Schools with a 40,000 word lead. The Ursuline School is the top high school, but only by a hair: Kentucky's Boyle County and Saint Mary's Ryken in Maryland are just a few thousand words behind Boyle.

In Division III, Buckingham Charter edged ahead of Ashe County Middle in the season total, but Ashe County did surpass the goal set by Principal Farmer to master 100,000 words this season. That means he'll be spending a night in a tent on the school roof sometime this spring!

We'll be watching the Division races closely to see who's on track for the new trophies, and we're rooting for everyone!

The Vocabulary Bowl leaderboards are structured so that schools of every size can compete at the county, state and national level on a daily, weekly and monthly basis. In addition to awarding monthly champions banners to the top high school and the top middle school year-round, we also award banners to Division and State winners at the end of the academic season. This year's competition started on October 1st, so now is the perfect time to learn more and get your students signed up to play, compete, and learn in the Vocabulary Bowl.