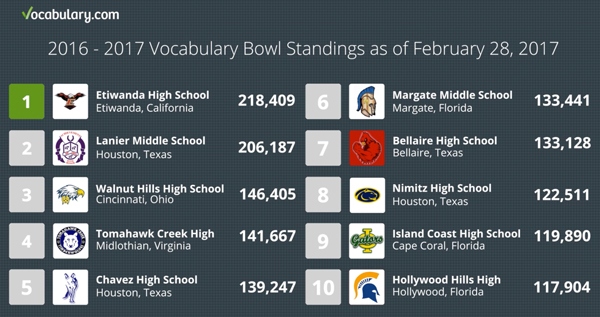 What's the best way to sum up the February Vocabulary Bowl action?

Turning tides. Shifting momentum. Ups and downs. Any of those phrases would work. You get the idea — there was major movement on the leaderboards, which means it's shaping up to be one exciting final stretch for the 2016 - 2017 Vocabulary Bowl season.

Check out the latest Vocabulary Bowl Roundup Video which shines the spotlight on Texas, where Bowl Fever gets hotter each year. But Texas isn't the only hotbed of word learning. Find out who's representing Arkansas and Arizona at the top of the leaderboards, and which schools from across the map returned to the top ten last month with major gains.

Etiwanda High School, the California force that's already claimed back-to-back monthly Champions banners this season, doubled down on their word learning. The result? Another Champions banner for February, and the coveted rank as current Bowl leader.

What does that mean for Lanier Middle, who has held that spot all season long? These top dogs are still a threat. After all, when it comes to the Vocabulary Bowl, you don't mess with Texas, the state that's cranked out past champions and is presently fielding several of the top middle and high schools in the country.

With two months left in the Vocabulary Bowl season, which ends at midnight on April 30, there are still plenty of surprises to come. So keep playing and keep learning, because whether you're an underdog or top dog, when you're expanding your vocabulary — you win.