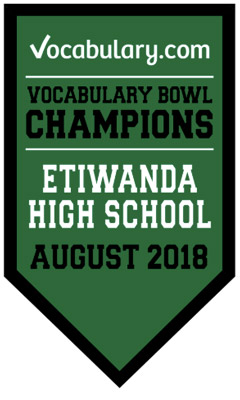 It was a week into August, and Etiwanda High School was nowhere to be seen on the Vocabulary Bowl monthly leaderboard.

Then, on Wednesday, August 8th, the Etiwanda Eagles went back to school. By the end of the first day, they had cracked the top ten. By the end of that first week (which was only 3 school days), the students had mastered 13,000 words.

This upward vocabulary trajectory continued, and by the end of the month their total soared to 58,923 words mastered, setting a new record for August and serving as an auspicious beginning for the school that may become the first in Bowl history to pull off a three-peat as North American Champs in the upcoming season.

For those of you out there who want to know the secret to Etiwanda's Bowl success, here it is: EHS's English teachers consistently assign their students vocabulary practice that's connected to their course readings, units of study, and upcoming standardized tests. Sound simple? It is. Regular routines that integrate vocab instruction with the curriculum are the key to success.

But just because their strategy is simple, that doesn't mean it's been easy. The students at Etiwanda have worked very hard to master all these words and to build their reputation as the school to beat in the 2018-19 Vocabulary Bowl, which begins on October 1st.

Mastering even one word means correctly answering multiple questions on each core meaning and proving that you know it inside and out. The key is the Eagles have made practicing lists and playing The Challenge on Vocabulary.com part of their daily routine. A steady habit of word-learning is how these students are building their vocabularies and racking up points for their school in the Bowl.

Interested in finding out how you can get your school involved in the Vocabulary Bowl? Check out the Bowl page for all the latest news and details. The best part is, it's never too late or too early to start playing. Each month we award a banner to the school that masters the most words. At the end of the season in May, we award banners to the top middle and high schools in the country, the top schools in three size-based divisions, and the top school in every US state and territory and every Canadian province. That's a lot of banners up for grabs — does your school have what it takes to win?