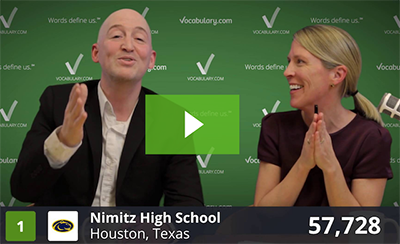 Once again, the Cougars from Nimitz High School dominated the Leaderboards and snagged the January Champions Banner. Can they make it a threepeat in February? With their two-month campaign, they've stormed the Bowl scene and — with three months to go for the season — just made it to the top ten overall, establishing themselves as a real threat for the trophy and the North American Champion title.

What's behind this surge of word learning? Nimitz teacher Mr. Andrew Terrell says that actually, despite the recent attention at the national level, "It is not an overnight thing." He explains that while the Cougars have be practicing and learning on Vocabulary.com for quite some time, like a lot of schools they just recently got serious about competing at this high level. Mr. Terrell went on to tell us, "That strand of adventure and competition are natural for our students... For now, I am just proud that the students are learning." Imagine what the Leaderboards will look like next season, when Nimitz enters the season in October at this level of play.

In the Middle & Elementary School Division, familiar tour-de-force Lanier won again, and while they still hold on to the overall lead for the season, the Eagles of Etiwanda High School appear poised to overtake those Purple Pups. That promises some intense leaderboard action in the coming months, meaning the staggering amount of word-learning is sure to continue.

The January Spotlight Segment focused on Georgia, where Bowl fever is spreading. Three of the top Georgia schools — Tucker High, Pope High, and River Trail Middle — have also been in their Division top ten last couple of months, so they're making their presence known on the national stage, too.

January Bowl Action was all about closing gaps — vocabulary gaps, with hundreds of thousands of words mastered — and Leaderboard gaps, with so many schools motivated by the pride that is ignited with the spark of academic achievement.

We've also got a special request this month for all schools — not just the ones atop the Leaderboards. Show us a short, high-energy video of your students telling us how much you love Vocabulary.com or the Bowl. Sing it, rap it, cheer it — just give us a shout and show us your word-learning spirit. We just might use it in an upcoming special Spotlight Segment that's all about students getting fired up to play, compete and learn. Send us the link to your video at bowl@vocabulary.com.

Thank you for the videos that have already come to our inbox, and PLAY ON!